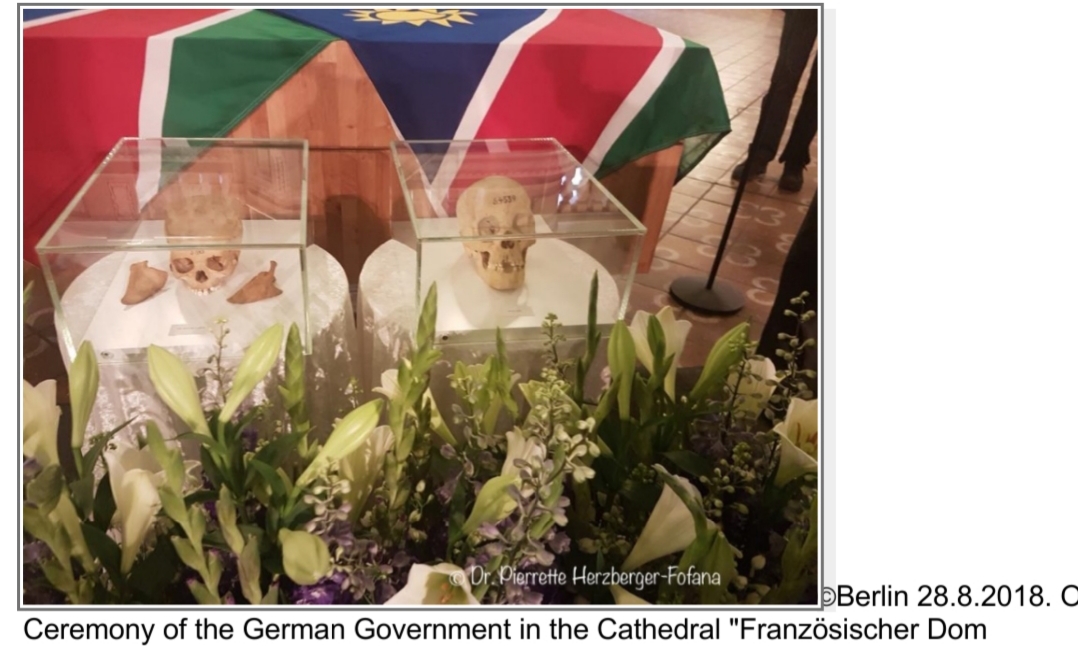 Dr. Pierrette Herzberger-Fofana
Following the return of three human skulls to Namibia in 2011, 2014 and 2018, Germany has acknowledged its responsibility. Berlin admits that the massacre of the Hereros and Namas of Namibia 1904 constitutes a genocide. It was the first genocide perpetrated by German colonial troops in the 20th century.

“We will now officially call these events what they are from today’s perspective: genocide,” German Foreign Minister Heiko Maas said on 28 May 2021 in Berlin.
He added:
“In light of Germany’s historical and moral responsibility, we will ask for forgiveness from Namibia and the descendants of the victims.”
Despite the high compensation that will be paid to Namibia, this responsibility has mainly a symbolic value as the issue of reparations is put on the back burner.

The despoliation of the corpses of Namibia
In fact, numerous exactions were committed, in addition to the murders, the first medical experiments were carried out on Hereros and Namas prisoners, for pseudo-scientific works that would later serve the racist theses of the Third Reich. Graves were despoiled and the skulls of the deceased were sent to the pathological institute of the anthropology department of “Race and Social Hygiene” in Berlin for experimental purposes. The aim was to scientifically prove the alleged superiority of the Aryan race over other peoples and, in this case, that of white Europeans over black Africans, by analysing the facial characteristics of the Africans’ heads. These skulls and other bones have been in the Museum of the History of Medicine at the Charité Hospital in Berlin for over a century. The heads had been cut off from the bodies and preserved intact in formaldehyde with their faces, their skin and teeth.
Dozens of other skulls and bones are preserved at the University of Freiburg in southwest Germany and sometimes in private homes. They were carefully numbered and therefore easily identifiable. More than 7,000 skulls from all over the world are in the museum’s possession and about 300 of them come from Namibia. So far 68 skulls and bones have been returned to Namibia.
For the Namibians, the skulls and bones kept in Germany are not museum pieces or historical relics. They are the remains of their grandparents who were massacred in 1904 during the extermination of their people.
German researchers assume that these people died as victims of the German armed forces the so called “Schutztruppen” in the colony of South West Africa, or died in the colonial concentration camps run by the Germans.
The question of the restitution of the remaining human skulls and bones languishing in museums will also have to be resolved.
It took five years of bitter discussions to arrive at this recognition of the atrocities committed in the former German West during the protectorate. Germany officially occupied Namibia from 1884 to 1919, which was then known as the German South West. As soon as they settled in Africa, the German settlers took over land and drove the Hereros out after a hard battle in the desert.

The order to exterminate the Hereros and Namas
Following the extermination order of the governor of the region, Lothar von Trotta, to the colonial troops or ‘Schutztruppen’, a violent repression ensued.
The United Nations defines genocide as a number of acts, including murder, committed with the intent to destroy, in whole or in part, a national, racial or religious group.
The terms of the famous extermination order “Vernichtungsbefehl” correspond to the definition of genocide. Indeed, von Trotta had planned a “systematic extermination” of the Hereros and gave the following order:
The Hereros are no longer German subjects. (They) must leave the country (…) Within the German borders every Herero, armed or not, in possession of cattle or not, will be shot. I will not receive any more women or children. I will send them back to their own people, or I will have them shot (…) My policy has always been to exercise it by brutal terrorism, even by cruelty. I annihilate insurgent tribes in streams of blood…. This is the only seed for growing something new and stable. [Lothar von Trotha, Great General of the Mighty Kaiser]
65 000 Namibians out of a population of 80 000 are brutally massacred for refusing to give up their land to settlers. They were driven to the Omaheke Desert in the east of the country where they died of hunger and thirst during the bloody and decisive Battle of Waterberg on 11 August 1904.

Germany’s restorative justice agreement
The head of German diplomacy, Mr Heiko Maas, presented the terms of the restorative justice agreement between Namibia and Germany. 1.1 billion (US$1.34 billion) will be allocated to Namibia to support the country’s development through a 30-year programme of infrastructure spending, health care and training programmes for affected communities.
The German foreign minister said that the agreement was “a gesture of recognition of the immense suffering inflicted on the victims”.
Germany does not want to hear about reparations and is turning a deaf ear to this important issue for Namibians. Moreover, in his speech, the head of the German diplomatic corps specified that it was a question of “licking the wounds” and not of compensation on a legal basis, and that this recognition does not open the way to any “legal claim for compensation.”

In the Namibian opposition parliament in Windhuk, the agreement drew strong criticism, with the People’s Democratic Movement (PDM) calling it an “insult” and a “lack of respect” for Namibia. For these MPs, the German representatives “did not negotiate in good faith”, the daily “The Namibian” said, quoting the honorable Member of the Namibian Pprliament Mrs Inna Hengari. Furthermore, the MNP argues that the negotiations were deviated from their original objectives because:
“The negotiations were never about projects but about reparations,” said Hengari.
The parliamentarian also deplores the fact that the three pillars of their demands have not been taken into account, namely:
“an official apology, recognition of the genocide and reparations. Where are they in this offer?” She asked.
Within the Diaspora in Europe, the agreement is considered “a scandal”.
The agreement was made to the detriment of the descendants of the Herero and Namas peoples. The same is true of the traditional leaders who have so far refused to approve the agreement, according to the Namibian newspaper. They regret that traditional leaders and civil society organisations were not involved in the negotiations.
Some Namibian parliamentarians have called on the opposition to unanimously reject the agreement between the two countries. They continue to advocate for direct reparations to the descendants of the genocide victims.
The justice agreement does not erase all the ordeal suffered by the Namibians, but it will at least give a new impetus to the relations between these two countries, intimately linked by a common history, and as the minister, Heiko Maas, declared:
“We cannot draw a line under the past. However, acknowledging the wrong and asking for forgiveness is an important step towards overcoming the past and building the future together

The process of reconciliation could begin for both countries and above all the duty to remember will enter a new phase, because if this work of remembrance on the Nazi period is remarkable, that of the colonial period in Africa and the crimes committed are passed over in silence. They have still not found a place either in history textbooks or in the German collective consciousness.