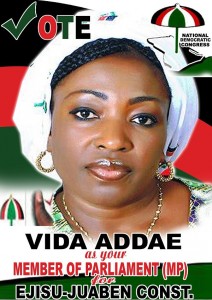 for EJISU-JUABEN Constituency in Ashanti Region

Prof. Brando Okolo once asked a question. How can we become involved in German politics?  He answered that in his article “Congress for the Advancement of People of African Heritage (CAPAH)” that to become involved in German politics, we first need to establish political capital on the grass-root level. This can be done by identifying a city, village or (county) where Africans are high in population. This city or country will serve as a model political district.

He stated further that we need to scout-out an African-German of good repute, social, cultural and educational pedigree.

This individual must have the skills and charisma befitting of a politician. He or she must have a history of demonstrated ability to unite and govern an organization of people.

Ms. Vida Addae, a Hamburger of Ghanaian origin is heeding just such a call and challenge. Born on the 25th of October 1966 in Ghana, she attended Base Workshop Primary school, Burma Camp Accra-Ghana and OLA Girls Secondary, HO-Ghana before travelling to Hamburg Germany. In Germany she attended a renowned Beautician School in Krefeld-Germany and later undertook training in Handwerkkammer (Training School) in Hamburg. In 1990 she opened her own beauty and hair products shop in Flensburg-Germany. 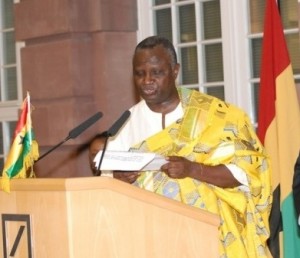 H.E. MR. PAUL KING ARYENE addressing Ghanaians and guests during Ghana 55th Independence anniversary urging them to support the progress so far made in the country

In 1999 she moved to Hamburg-Germany and added a call Center to her beauty and hair products shop. From 2005 to 2009 she was the NDC Party Chairlady in Hamburg where she helps to organize a vibrant political movement. In November 2011 she travelled back to Ghana to engage herself in local politics and eventually contest for parliamentary primaries of EJISU-JUABEN Constituency in Ashanti Region under NDC and won the election as a Parliamentary Candidate.

Although professor was initially advising Africans in Germany, but people like Vida Addae has seen the need to transfer their knowhow and experience in building their country. Vida Addae is following the full steps of many Diaspora. For example, the former speaker of House of Assembly in Nigeria as well as the former and current Minister of Finance is from the Diaspora. It is also a well known fact that some of the state Governors in Nigeria and some politicians in Africa are from the Diaspora who are heeding this clarion call from people like Professor Brando Okolo for best practices transfer from Europe to Africa. Most hamburgers irrespective of country of origin will be looking forward to visiting Vida Addae in Government house in Ghana come 2013. Vida Addae needs not only our prayer but our support for the national election coming up between November and December this year. Call her today to show your solidarity. Hamburgers needs one of their own in Government.