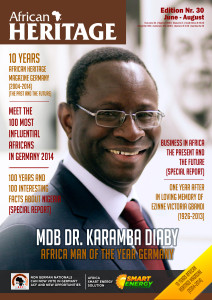 The Marsassoum, Senegal-born politician came to Germany on a scholarship in 1985. After a  the one-year language course at the University of Leipzig, Diaby gained an adminission into the Martin-Luther-University Halle-Wittenberg, where he studied chemistry. He graduated in 1991 with an MSc. Degree. Five years later, he bagged a PhD. from same University. In 1996, he joined the Eine-Welt-Haus (One World House) as Project Co-ordinator, a position he held until 2001. Later, he moved to the DAA (Deutsche Angestellten-Akademie) Halle, an Adult Continuous Education centre, where he was in charge of intercultural education and training. In 2002, his contributions to the integration of foreign-born residents in Halle was recognised nationally as he was received that year by the then President Johannes Rau in Berlin.
From 2005 to 2008, Diaby was the co-ordinator for migration and integration in a youth workshop in Halle. He joined the SPD (also in full pls.) in 2008 and a year later was elected councillor in the city, where he concerned himself with issues on education, youth and social affairs, environment and ecology were his primary assignments. From 2009 to 2011, Diaby was the chairman of the Federal Immigration Council (Bundeszuwanderungs- und Integrationsrat) – the umbrella organisation of more than 400 Foreigners’ Advisory Councils (Ausländerbeiräte), representing more than 4.5 million immigrants in Germany. Since 2011, he has been a full-time adviser for integration in the Ministry for Labour and Social Affairs of Sachsen Anhalt.

In addition to his work for immigrants, Diaby advocates for young people without good educational background or those who have problems having handworks, elderly workers or long-term unemployed, aged pensioners poverty stricken and marginally employed men and women.
The motivation for the political work of Diaby, whose motto is Vielfalt schafft Werte (diversity creates values), is his conviction that solidarity in society can be sustainably secured only if value is drawn from the potential of the different social groups.

Diaby is especially passionate about education. He believes that when a child is given the chance to have education, his or her way in life is has been paved. His passion arose from his past. He lost his mother at the age of 3 and his father four years later. Diaby’s elder sister assumed the role of parent and brought him up, instilling in him at a very early age the conviction that education was the only means he could use to overcome his childhood misfortune.
Frank-Walter Steinmeier, leader of the parliamentary group of the SPD in the Bundestag, acknowledged Diaby’s candidacy. For the social democrats, it is a sign of the Part´s transparency and  acceptance of citizens with a migration background. Steinmeier described the African as “a very likeable guy who approaches people with openness and excitement”.
Diaby is married to Ute, a German agriculturist, and they have two children – a son and a daughter. In fact, the couple married on 22 September 1995, and Diaby has a date with history on 22 September 2013. What a coincidence!

The Jihad Against Boko! Civilians...