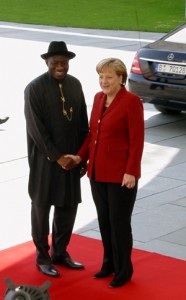 Nigerians in Diaspora could vote in Presidential and Gubernatorial elections

“That insecurity necessitated by terrorism is not peculiar to Nigeria and like other countries in the world; Nigeria is not relenting in her efforts to fight terrorists like Boko Haram”

As part of his working visit to Germany, the president of Federal Republic of Nigeria Dr. Goodluck Ebele Jonathan hosted an inter-active session with the international press in the conference room of Ritz Carlton Hotel Berlin on Thursday 19th April, 2012.

In attendance was all the “A” list media organizations in Germany including members of Nigeria’s federal executive council  that travelled with him like; Dr Peter Obi Governor of Anambra State and his Adamawa State counterpart-Murtala Nyarko, Mrs. Deziani Alison-Madueke-Minister for Petroleum Resources, Prof Bath Nnaji-Minister for Power ,Comrade Abba Patrick  Moro Minister for Interior, Mr. Olusegun Aganga Minister for trade and investment, Mrs. Sarah Reng Ochekpe – Minister of Water Resources and so on.

In his opening address, Dr Jonathan frowned at the common scenario whereby Africans come cap in hand for aids and emphasized his administration’s resolve to a mutual cooperation with Germany hence the signing of a bi-national commission between Nigeria and Germany and the signing of MOU with Siemens AG for the production of medium and large scale Turbines for power generation in line with his commitment to provide adequate and affordable electricity for Nigeria. 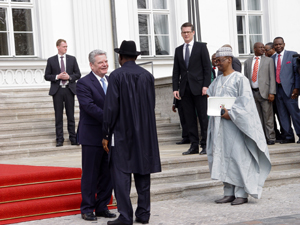 The bulk of questions from the world press hammered on issues of investment phobia by the West as per the insecurity of life caused by the menace of Boko Haram. In his response, Dr Jonathan reiterated his government’s resolve to handle and provide security of life and property while addressing what he called, the challenging incidents of developed and emerging economies. Furthermore, he emphasized that insecurity necessitated by terrorism is not peculiar to Nigeria and like other countries in the world; Nigeria is not relenting in her efforts to fight terrorists like Boko Haram.

Mr. Obiora Nweke of African Heritage wanted to know the depth and scope of the Governments rehabilitation policies for the area of Niger Delta in view of the obvious swap of greed over genuine grievance by roving bandits. In his answer, Dr Jonathan threw more light on the efforts of his government to provide livelihood for the people of Niger Delta for example, through the establishment of a Niger Delta Commission which is a ministry responsible for infrastructural provision for the Niger Delta.

Kenneth Gbandi, CEO Heritage Media Group and Editor-in-Chief of African Heritage Magazine also wanted to know about possibility of voting rights for the Nigerian Diaspora in future elections in Nigeria knowing the relevance of this stakeholder group to the well being of every nation, using the Chinese and the Jewish Diaspora as good example. Dr Jonathan stressed the contributions of the Nigerian Diaspora to national development and thanked them for all their efforts. 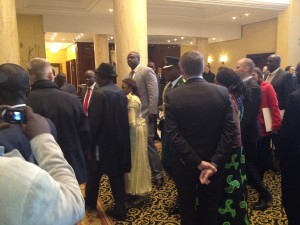 The President mentioned that he has shown clear interest to the election commission (INEC) but that because of their independent nature, he cannot order the commission to make sure the Diaspora votes in the coming elections. Furthermore, he cannot make any definitive promise but assured Nigerian Diaspora of his support for the idea for at least the Presidential and Gubernatorial future elections for a start.

The media chat was very inter-active and touched on major challenging issues of the present Nigerian government and the main areas of Dr Jonathan working visit to Germany.