Akwa Ibom State has a very rich history full of state and national trailblazers, and with several highlights worth celebrating. One of many important historical facts and highlights is that Lord Lugard, a colonial governor, signed the Amalgamation Proclamation in a house currently located in Ikot Abasi Local Government Area of the State.

Akwa Ibom State and other Nigerian citizens in the Diaspora are proud of these important historical facts. Despite acknowledging that there are sharply divergent viewpoints regarding the 1914 Amalgamation policy, we believe that our irreversibly history leading to the sovereign Federal Republic of Nigeria is worthy of celebration.

Nigerians must make the best out of the sovereign Federal Republic of Nigeria! Whether the Amalgamation was reasonable and necessary in 1914 will always be an issue for discussion. But, as patriots, we proudly hail Nigeria and acknowledge that our commonwealth is blessed with vast resources and potentials by which we must develop and sustain the enviable status as the Giant of Africa and respected country of the world.

Choosing Germany is not accidental! We are tracing a journey of history. In 1885, during the infamous Berlin Congress held in Germany, Africa was simply divided and given to the colonial powers of Britain and other European countries. Africans were neither consulted nor present at the Berlin Congress in which their territories were divided into colonies and given to European powers. But, today, we can celebrate in Germany our collective destiny as a free and prosperous people. 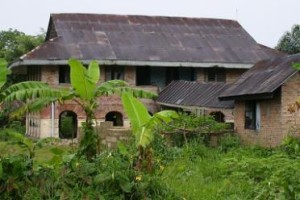 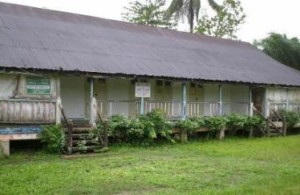 In this house  in 1914, the colonial Governor Lord Lugard amalgamated the Northern and Southern Protectorates into a geographical entity that later became a sovereign nation called Nigeria. The historical site continues to serve as an administrative office in the Ikot Abasi Local Government in Akwa Ibom State.

Originally, the building belonged to the Royal Niger Company, a group of merchant traders who were given the Royal charter to administer over protectorates and on behalf of the British crown until 1900.

It served as the first administrative headquarters in which the Nigeria nation was officially born. The building stands on short concrete pillars with corrugated iron roof sheets, brick walls and hardwood floor.

This one storey house (left), also located in Ikot Abasi, Akwa Ibom state is where Lord Lugard lived during the amalgamation period. The historic site was the first administrative headquarters of the region before it was relocated to Calabar, Cross River State.

Significantly historical is the fact that the building is situated on the bank of a tributary – the Imo River. King Jaja of Opobo was shipped into exile from this tributary. There were several other colonial buildings in this area of Akwa Ibom State that served as first courts, offices, residential houses and recreational centres. Some of those facilities are being preserved as historical sites.As part of events marking the Centenary celebration, the Federal Government is planning to build a Centenary City in Abuja. We call on the Federal Government to make national monuments of these important historical sites in Ikot Abasi and Ikot Ekpene, Akwa Ibom State.

Building on our achievement  of Nigeria-National Coalition for Jonathan Presidency. I invite you to join me  as we Flag-off the centenary celebration of Nigeria with all Nigerians in Diaspora.