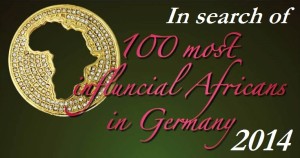 The editorial Team of African Heritage Magazine is requesting nominations from Heritage readers, subscribers African analysts, students and the general public, especially in Germany for their choice of this most exclusive list of Heritage 100 most influential Africans in Germany.

The selection criteria borders on people who have contributed and are still contributing to the development of the African community through the discharge of their duties or activities. They must also in addition be creators of wealth or ideas which benefits the community and the host nation Germany as a whole.

Kindly send your nomination(s) to

Cameroon Cracks Down On Illegal Ho...