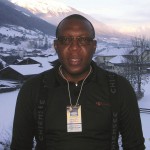 ““Mr. Ogbogbo’s dissertation was in Data Mining (DM) / Knowledge Discovery in Databases (KDD) an area that combines Artificial Intelligence (AI), Machine Learning (ML), and Neural Networks with VLDB – Very Large Databases. This article was  first published in African Heritage Magazine 21 Edition  and republished as part of the ongoing debate about the comment credited to Ambassador Abdu Usman Abubakar that Germany does not have many Nigerians and the few ones available are busy fighting each other to make any meaningful contribution”
His busy schedule leaves him little time to associate with his fellow Africans, but he still does his best to ensure that he keeps in touch with his people. ”When I came to Germany, it dawned on me that I must sacrifice some of my years and free time to do something different or else I will end up working in German restaurants for the rest of my life. That is why I decided to study all over again,” Mr. Samuel Ogbogbo disclosed to AH. Listening to him, one is quick to recognise the fact, here is a man who is well exposed, well experienced and hard working – a man who has had the privilege of travelling all over the world and has worked with the right expertise in the IT industry.

Mr. Ogbogbo’s dissertation was in Data Mining (DM) / Knowledge Discovery in Databases (KDD) an area that combines Artificial Intelligence (AI), Machine Learning (ML), and Neural Networks with VLDB – Very Large Databases.   After his Masters degree in Computing Mathematics in the U.K, he started his first job with the CCR GmbH, a company owned by the Sparfinanzgruppe AG, as a System administrator on RS6000. The Project was based on money cards and electric transfer. Later, he worked as a Software developer/Programmer with the Commerzbank AG in Hamburg and was responsible for the Y2K project and the “Commerzbankvermögensanlagesystem,” COBAS. He was also the IBM Database Mainframe Administrator with the AMB GENERALI Holding AG also in Hamburg, an umbrella company comprising of big firms like Völksfursorge, Badenia, Thuringia, AdvoCard, COSMOS Direkt and Aachener-Münchner on the new Euro-money that ushered in the Euro currency. Mr. Ogbogbo also worked in the United Kingdom as an IT-Specialist / Senior DBA with Ingenico Limited in Edinburgh, Scotland, a world leading company with secured banking electronic transactions and payment solutions on the Chip ´n PIN project. He is currently working on the following projects as the IT-Consultant with the European Patent Office in Munich, Germany and The Hague office; Database supported – Online Patent Filing Systems, application proactive availability monitoring, Performance Tuning as well as regular DBA act ivies. Part of his IT- Specialist project includes the building of the world’s largest medical database at the School of Medicine, Swansea University. This encompasses the Health Information Research Unit (HIRU), Centre for Health Information Research and Evaluation (CHIRAL) and the all too sensitive Secured Anonymous Information Datawarehouse (SAID), all of which are run partially on the federated network of Server Clusters – JANet (Joint Academic Network).

His areas of Specialisation:

Mr Samuel Ogbogbo is an IT Consultant with more than 11 years of experience in IBM DB2 Mainframe Database Logical and physical design and implementation (zOS, OS/390) MVS, TSO, ISPF) – operating systems environment and AIX/ UNIX; LW and IBM Web sphere, Performance Turning and Availability Monitoring, automating full Online – Backup, as well as Disaster and Point in Time Recovery (PIT) Processes for Databases production. He also specialises in Data warehouse Remote Access Security administration and maintenance, Auditing procedures implemented through the writing of Triggers, Stored Procedures, RACF, as well as User Access Grants and  User Revoke Control facilities. Mr Samuel Ogbogbo is an outstanding example of Africans in the Diaspora, with an easy-going character, and an indomitable spirit. His physic is also quite impressionable, just like his outstanding educational background and career, as he stands well above 6 feet.