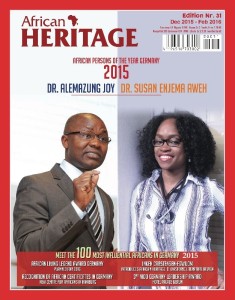 African Heritage Magazine celebrates another edition of 100 most influential Africans in Germany. Going by new trends, the new African spirit and a vibrant and dynamic generation of Africans in Germany, this year’s list as expected is full of surprises and certainly it will not be devoid of the usual interests and excitements as well as criticism.

Our selection criteria from nominations generated through emails and social media channels focused on Africans who are contributing to the socio-economic development of the African society through self-motivated initiatives beneficial not only to the Africans and their host country Germany but also to the development of Africans in the Diaspora and the African continent too were ousting in year 2015.

To be sure we remained as democratic as possible we concentrated our selection from the nominations from African Heritage readers, subscribers African analysts, students and the general public especially those residing in Germany for the exclusive list of Heritage most 100 most influential Africans in Germany 2015.

In this edition, we are equally celebrating a unique feature that may probably question familiar journalistic norms and ethics. This special edition featured in addition to the prestigious list of the 100 most influential Africans in Germany for the year 2015, also for the first time two prominent Africans emerged as African Person(s) of the year in Germany 2015. After applying all the known elimination criteria, the activities of these two unique individuals stood out in 2015. The Editorial Team of African Heritage Magazine congratulates Dr. Susan Enjema Aweh and Dr. Joy Alemazung  as African Persons of the Year Germany 2015.

Meet the 100 Most Influential Afri...