Homepages
Trending News
HomeBusinessBarr. Charles Ogboli will Meet with Delta indigenes in Germany on 04/10/2014: I’ll move Delta to next level if elected governor 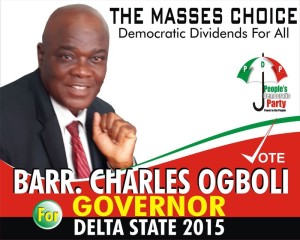 Barr Charles Ogboli, a people’s rights activist, is a frontline aspirant to the gubernatorial seat in Delta state in 2015. In this encounter with newsmen recently, he spoke about his quest to govern Delta state and his desire for President Goodluck Jonathan to run for presidency in 2015. The excerpts.

2015 is around the corner. Do you see the Independent National Electoral Commission, INEC capable of conducting free and fair elections?

Taking a cue from the recent Ekiti state governorship election, and for the fact that all the candidates that contested the governorship race in the state have commended INEC for a job well done, I must say that I have confidence in the electoral body. The body has learnt its lessons considering the shortcomings during the Anambra governorship election. The one that was recently held in Osun state has also shown a tremendous improvement from previous elections. I think INEC can do well if the stakeholders are willing to cooperate with the electoral body. The electoral matter should not be left entirely in the hands of INEC. The electorate and politicians must also play by the rule. The new biometrics voters’ cards introduced by the INEC will checkmate electoral malpractices that used to characterise elections in Nigeria.

There have been calls for you to contest the governorship of your state, Delta. Have you got what it takes to run for the post?

In politics, capability is always there, but acceptance is the major issue. My people accept me and they have asked me to run. I have no option but to accept their request. I don’t have to be a politician to know what is happening. I am a lawyer and I feel that there are a lot to do in my state considering the unemployment and crime rates. I need to be there to empower the youths to realise their potential and contribute to the development of the state.

What is the zoning arrangement for governorship slots in Delta state?

It is now very clear that the next governor of my state will come from my zone. I am from Aniocha north local government area of the state. It is an Igbo speaking area. It is now necessary to say that it is our turn. There was a meeting by the stakeholders and they submitted that my zone is being marginalised in the political equation of the state. So far we have had Felix Ibru, James Ibori and incumbent Emmanuel Uduaghan as governors. We can’t continue deputising them. We are brothers and sisters and I feel that nobody should feel marginalised in the state. The terrain is too hot but I have to come out to tell the people of Delta state that I have what it takes to move the state forward.

Considering the godfather factor, what’s your relationship with the incumbent governor of Delta state?

I don’t have a godfather. My relationship with the governor is cordial. But I want to give you an example of Chief Willy Obiano of Anambra state. Nobody heard about him before his emergence as governor. He is a banker. In the case of my state, I remember that during the travails of Uduaghan at the election tribunal, I wrote him and encouraged him not to lose hope. All things being equal, he has done exceedingly well in Delta state. We voted him in and we have been supporting him. I commend him specifically for citing the airport in Asaba with international standards. He has also constructed good road networks. If I am his successor, I will surely continue from where he stopped. Criticisms are in politics – whether you are doing well or not, be rest assured that critics must criticise. This is because people ask for more in governance. I have gone round Delta state and I give kudos to the governor. He has not let us down.

Under which political party do you hope to actualise your dream?

It is the Peoples Democratic Party. I have toured some of the states under the PDP and the governors have done extremely well. So it is the best platform for me to actualise my ambition and also deliver democratic dividends to my people.

Do you think the All Progressives Congress is a formidable opposition to the PDP?

I don’t think so. The APC is not on ground from my own perspectives. It is not a strong opposition to the PDP. I advise PDP members who defected to the APC to retrace their steps before it is too late. There is nothing in the APC except crises. Buhari is coming out; Atiku is coming out. This makes it crises-prone. The APC is just on air with propaganda.

Come 2015, do you clamour for President Goodluck Jonathan to contest for the presidency?

I have not seen anything wrong in Jonathan running again. I have also not seen in the Nigerian history where a president runs for one term, and it cannot start from Jonathan. He became president by the divine will of God. Looking at his score-card and some criticisms against him, I laugh because one can’t expect the president to do what governors and local government chairmen should do. That is the essence of delegation of powers. It is true that the head is blamed when things go wrong, but I can assure you that Jonathan has not done anything wrong. Days of fuel scarcity are over; the rail line has started working; look at the electricity sector. But come to think of it, there is no reasonable government that can perform magic in the atmosphere of what is happening in some parts of the north. It is enough distraction for government not to carry out meaningful development programmes. So much money is being spent on security. I advise Jonathan to remain focused.

Jonathan should run and I urge northerners to support him considering that’ he represents the minority groups that have contributed immensely to the development of the country. We are not complaining about that. When Shagari, Buhari, Babangida, Abacha and Yar’adua were there, the Niger-Deltans did not complain. We supported them. Northerners should encourage Jonathan. I am happy that some of them have identified with him.