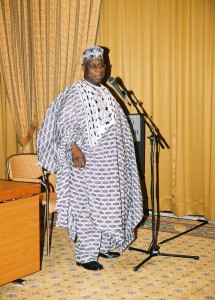 There has been much ado about the alleged 1000 political opponents sniper list since former president, General Obasanjo made the scary revelation. This leaves 168 million Nigerians on list number 2, after approximating another 1000 political cabal, who may currently be in favor with the president and not yet on his sniper list.

Sadly, many are not agitating about the larger and active sniper list #2, the one you and me and our parents have been on for 53 years of Nigeria’s existence. Many of our parents have been killed already on the 168 million sniper list. Many Nigerians have fled the country on exile for fear of death on this larger list. Last week, 55 Church members in Adamawa state were killed on sniper list 2; several villagers in Borno had their homes burned and were raped and killed on this deadly list. A journalist was killed in Ondo by ‘snipers.’ People were killed on bad roads and bridges, poisoned by oil pollution and gold mining and in rundown, ill-equipped hospitals, because their names came up on the list. Thousands of Nigerians die every year, ‘before their time’ as their names come up on the list, but Obasanjo did not raise this issue and many of us are so denuded by the chronic maladministration, we’ve lost empathy.

According to Nigeria’s Bureau of Statistics, Nigeria has 112 million poor and 100 million destitute—living below a dollar-a-day. This list does not include you and me; the selfish Nigerians who are lucky to have computers and cell phones we use to read this article today and to interact. Most of the destitute are from the 81 million unspoken for and unrepresented villagers in our villages, 80% of who are destitute. These villagers are top on the government 168 million sniper list. They are the ones sacked by our politically invented and supported Boko Haram terror situation. They are the ones who fetch water to drink from our oil spill polluted creeks and die from cancer it causes every day. They are the ones whose children die of lead toxicity in Zamfara. They are the ones who die in clusters in accidents of our dilapidated, unregulated transport buses, for the lack of, not the popular among the elite, private jets, but mere train networks as obtains in other nations. These are the Nigerians, top of the list who die of cholera, typhoid, even malaria and die at child birth in make-shift maternity centers with untrained hands and the pitch darkness of our shabby power.

Many at the top of this list have died of things you don’t know kill, like sorrow and poverty.

But Nigerians do not care about our destitute; which by the way, Nigeria has the most of, of any country in Africa. Yes, Nigeria has 100 million destitute! The nation that comes next is DRC, which has 62 million. We, one of the world’s top oil producers and a nation so blessed in oil, land and most importantly, human resource, harbor some of the most destitute of all nations on God’s earth. We are proud to own 10% of the entire world’s poor. In our ‘democratic’ fourth republic, our destitute level has doubled since midway into the Obasanjo tenure to the current level today.

Why is the situation so bad in Nigeria? Why and how does a nation that has so much blessing in terms of natural wealth, have such large figures?

Top on the list is corruption as we all know. Almost all administrations in Nigeria have competed in corruption, save perhaps those of Murtala and Idiagbon/Buhari. Things like oil subsidy theft that we rioted about, lead to the robbery of up to half of our endowment, and even though they are getting worse today, they did not start with Goodluck Jonathan. He inherited these criminal siphons from previous governments which set up several funnels to steal most of the nation’s wealth. It was with sadness to our current presidency, that when we protested the oil subsidy removal, this information got known to us. And today, these holes, not only remain but have been widened. And we have abandoned our protest and abandoned the villagers at the top of the 168 million sniper list.

The 10 or 50 billion dollars stolen by the executive leadership according to our CBN governor. That is 12-62% of our total earnings in our mono economy. According to a report last week in PremiumTimes, the presidency is pressuring the Senate to discontinue the probe of this stolen national wealth. How will we not flaunt the world’s most destitute when such large capital thefts are legally made by the ruling class? Then you have the $7 billion they steal that was exposed by the Berne declaration, which the Swiss government has promised to cooperate with Nigeria in the investigation of, but Nigeria is yet to address.  Add all these known figures together and you wonder what Nigeria survives on. If we translate these stolen billions of dollars to sniper bullets, bullets cost a dollar a bullet, the presidency with these $7 billion here, $50 billion there, literally purchases billions of sniper bullets for target practice on Nigerians. Roads and bridges will not be built. People will pay more at the pump and not afford travel, to satisfy our executive thieves. Hospitals will lack professionals and medication. Doctors will go to work abroad. Police will be unpaid and will contribute to crime. Things will continue to spiral negatively as the looting which according to our implicated oil minister, Diezani Madukwe, constitutes ‘economic terrorism,’ will continue.

Each presidential jet bought by our greedy leaders, each billion of the oil billions stolen will fund and equip our army to defend us and themselves against Boko Haram. Will buy several drones to be used by our police in pursuing fleeing terrorists and robbers, will creates thousands of jobs for our unemployed youth, will reduce the harshness at the pump, will build trains and subway systems, will provide opportunity and a welfare buffer for the destitute. Will clean-up our creeks and Zamfara. We can go on and on.

The one thing that is constant from the true ethnic demographics of Nigeria’s leadership history is its inconsistency. The present and past leaders have been united only in plundering and organizing snipers to target the Nigerian masses. There are 500 more ethnic groups in Nigeria who have not yet held the reins of power.  Must we wait to be raped by all 500, to lead for 8 years plus before we start developing the nation? Some of us who support and clamor for a continuity of leadership based on perceived ethnic affiliations and nepotism have betrayed our ancestors, mortgaged our future, sold our souls and turned ourselves into the sniper force of the ruling elite; squeezing the trigger and picking off the poorer Nigerians at the top of the list, 10 at a time.

Successive governments strike deals to give impunity to their preceding administrations and to keep the illegally allocated oil wells and the criminal agents of those administrations in business while they are in power. The elite transfer the nation’s wealth and future from one administration to the next, never considering us at the nozzle of the barrel. It is common knowledge that we have chronically recycled military and civilian cabal from all our past administrations in each successive one till date. The youth and poor are nowhere to be seen, unrepresented, discarded and denuded. Boko Haram and MEND do not kill these elite. No surprise they care less about dealing with the true causes, nature and sponsors of the terror, and according to a recent police report, imported 7x more guns in 2013 than 2012 into the country to create more political terror networks and snipers with scopes trained on us.

As Nigeria approaches a next election season, it is time we swear to only support the best candidates for all offices, from our local government councilors through Senators and to the presidency; to pick and elect only candidates who exhibit competence, decency, intelligence and the wherewithal to free Nigeria from the shackles of corruption and mal-governance. Leaders who listen to us, respect us and are ready to discuss everything about Nigeria, including Nigeria itself, no holds barred.

There is no reason why the wealth endowed Nigeria must continue to carry last and remain at the bottom of the pot, only caring for and protecting the elite. It is way passed time for the youth and the poor.

It does not take so long to transform a nation into one that provides security and opportunity for its citizens. Malaysia and Dubai transformed in just five years. Shall we continue to wait with snail pace ‘transformation’ that only transforms the rich into billionaires with oligopolies that extort the poor, or shall we rise up and challenge the status-quo, and push our existing or new parties to present only responsible and dynamic candidates?

You’ve got a red dot on your head!

Recent Church Bombing: Is There a...