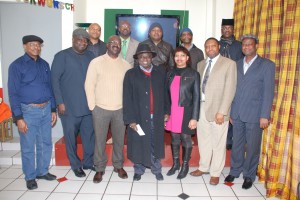 The forum which is the brain child of the African Heritage Magazine team represented by Hon. Kenneth Gbandi and Mr Obiora Nweke and the African Courier Magazine Team Represented by Mr. Femi Awoniyi and  Mr Kenneth Alakwe, held in Nigerian House,  Oranienburg Str. 159 Berlin. It drew lots of stakeholders from various German cities and officials of the Nigerian Embassy including Mr. Sunday O. Ajala, Heicent Nduka Maduadi and Mr. Luke Etoh as observers.

It was held in a peaceful but focused atmosphere with all semblance of a town hall meeting whereby participants and organizers alike, freely advertised their minds on the issues at stake. The remark sent in by Dr. Danial Ubani, Mrs. Blossom Onyegbula and Dr. Daniel Kutchin set the stage and tone for the forum.

On Security; a bevy of questions was posited by contributors including but not limited to;

What was the security situation in Nigeria before Kidnapping and the bombing spree of Boko Haram? What could be the reason for an upsurge in violent means of agitation in Nigeria? Does it have anything to do with issues of “Identity”? If so or not, How united is the Nigerian federation? How realistic is the adherence of the terms of the “social contract” as per the relationship between the Nigerian State and the Nigerian citizen? Where is the disconnect e.t.c.

Answers to these barrages of questions came in various forms, prime of which was the general consensus that Nigeria has through institutionalized corruption of successive governments, created a massive trust deficiency between the leadership and the citizens. The background to this situation was pointed out to include;

– The decay of original Nigerian values,

– The impact of a nonexistent equitable system of wealth distribution

– Lack of professionalism of the security apparatus of the Nigerian state

– Lack of accountability and responsiveness by government e.t.c

On Subsidy removal; the forum linked up trust deficiency and some of the reasons for the breakdown of security of the Nigerian citizen as mentioned above to the major reason why Nigerians tried to resist a total removal of subsidy on fuel. The discussion was sensitive on addressing a question by NIDO German Chapter President-Engr Emeka Udeajah-which is; Are Nigerians entitled to subsidized fuel?

A section of the forum argued in the affirmative, and maintained that the average Nigerian suffers because of the hijack of the benefits of fuel subsidy by a few individuals and that the government should have dealt a direct blow on such individuals instead of visiting the sins of a few on all.

Dr.  Lere Shakunle who is the Publisher of the Journal of Transfigural Mathematics, argued that a juxtaposition of corruption in all facets of the Nigerian economy is the true enemy of the Nigerian state and that the whole efforts of government should be geared towards a heads on war on corruption

The forum which set out to distance itself from only the identification of problems, proffered the following solutions to the Nigerian government for tackling the issues of security and the removal of fuel subsidy:

1. Government should downsize itself as a means of resurrecting otherwise dead trust of the Nigerian on leadership. A situation where several ministers are assigned to one ministry, enormous fund earmarked as security vote for Governors and employing the services of several redundant aids amongst others should stop.

3. Security personnel should be trained with and according to the level of the latest innovations in the field. It is insulting that a religious sect boasts of better equipment and training than the Nigerian security forces.

4. The Government should build sustainable refineries in Nigeria whereby crude oil would be refined. With this the planned deregulation of the industry, would quickly translate to affordable fuel prices.

5. The Nigerian state should encourage the reduction of dependency on oil and move more attention to Agriculture knowing that 75% Nigerians reside in the rural arrears and that 90% of them are subsistent farmers.

6. A coordinated taxation system using the advantages of ICT to harness the massive waste of resources in unpaid taxes.

7. A transparent system of the management of funds accrued from the removal of subsidy and a vigorous campaign to save the education sector in Nigeria from its present all time low state.

The forum accepted that the scope and depth of the Nigerians security issues and subsidy removal problematic could not be exhaustively treated in one day hence, periodic debates and conferences would be held by the media forum in Germany on a constant basis to evaluate and re-evaluate progress made. To this end, an internet web-site section would be opened for Nigerians in Germany for the discussion and understanding of government policies. The site would be moderated by the media team all aimed at harvesting the opinion of Nigerians that reside in Germany.

The forum agreed to appraise the performance of the present Nigerian government viz a viz the mentioned solutions after six months.