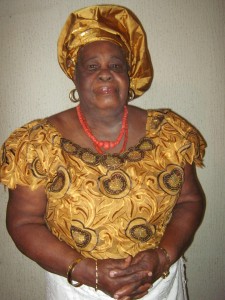 Mama, your cheerful dispositions and amazing Christian devotions merged with an inspiring humane and accommodating perseverance has laid a solid foundation for your 10 wonderful children. I will leave it to the imagination of your well wishesrs of how you have successfully brought up your children with Chief E.C. Gbandi, Iwegwe Ojiba of Akwukwu Igbo (late). Mrs. Victoria Gbandi, nee Ogbo was made a Lay Reader in 1985 at St John’s Anglican Church Akwukwu-Igbo. She was again recently conferred with the Honour of Ezinne (Good Mother) of the church Mama added to this annual celebration this year the “Ada Ogbo” title (the oldest woman in Ogbo Clan) as well as her 85 birth day on 11 May 2012.

Victoria Akuchukwunyem Gbandi is the Ezinne (Good Mother) of St. John Anglican Church Akwukwu Igbo, Anglican Diocese of Asaba and the “Ada Ogbo” title (the oldest woman in Ogbo Clan) was born on the 11th of MAY 1926 to Mr Joseph Ogbo, an Anglican Catechist and Mrs Priscilla Ogbo of Ogbe-Iyase, Akwukwu Igbo. She attended St John’s Primary School from 1936 and finished her standard six in 1942 in Okpare Primary School in Ughelli North Local Govt. Area, Delta State.

After her standard six, she taught in St John’s Primary School Akwukwu   Igbo and briefly in Onicha –Ugbo. In 1945, the elder brother Mr. Robert Kerry – then a UAC   Manager   took her to Sokoto where she trained briefly as copy typist and that fetched her employment with an establishment that cared for the relations of victims of the 2nd World War.

In 1947 She got married to late Chief Emmanuel Chukwuemeka Gbandi (died January 1992), then P & T Technician. This employment   took them to Kaduna, Zaria and to Enugu where they   sojourned for about three decades.   The marriage was blessed with 3 females and 7 males to the Glory of God, all of whom still surviving. The Ezinne of St. John Anglican Church Akwukwu Igbo is also a proud grandmother.

As she celebrates the “Ada Ogbo” title (the oldest woman in Ogbo, s Clan) and her 85th birth day, our prayers and best wishes and that of Akwukwu people are with her and her family

Mama, I wish to on behalf of my brothers, sisters and other members of our family as well as my organization say thank you for everything you have been to us.

The killing of Christy Schwundeck:...