Homepages
Trending News
HomeBusinessPRESS RELEASE: In search of 100 Most Influential Africans in Germany 2012 / 2013 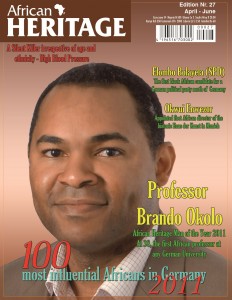 Following the 50 prominent Africans in Germany first published in 2006 we have each year    followed up with the annual 100 Most Influential Africans in Germany (MIA). One of the 100 nominations would eventually be selected under thorough scrutiny by the editorial team as the African Heritage man /woman of the year.

To be sure we meet the expectations of our esteem readers we decided since (2010) to request for nominations from Heritage readers and subscribers African analysts, students and the general public in Germany for their choice of this most exclusive list of Heritage 100 most influential Africans in Germany.

Our selection criteria borders on:-

1.         People who have contributed and are still contributing to the development of the African community through the discharge of their duties or activities.

2.         They must also in addition be creators of wealth or ideas which are beneficial to the community both Africans and Germans alike.

3.         Politicians, sports-persons and celebrities are excluded from our list of 100 most influential Africans in Germany unless they are also creators of wealth or ideas in addition to their celebrity status.

Send in your preferred nominee with photo and CV to:-

The Editor- in -Chief

Duncan Mighty: The official 1st So...