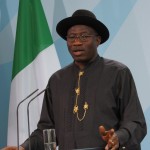 ABUJA – President Goodluck Jonathan has forwarded the name of Justice Aloma Mariam Mukhtar to the Senate for confirmation as Chief Justice of Nigeria, to take over from the incumbent Justice Dahiru

Musdapher , who in-line with section 291(1) of the 1999 Constitution, as amended, will bow out of the judiciary on July 15 upon clocking the 70 years mandatory retirement age for judicial officers within that cadre.
If approved by the Senate, the nominee, who is currently a Justice of the Supreme Court (JSC) would be sworn-in as the first female CJN.
In his letter addressed to the President of Senate, Sen. David Mark, titled: Appointment of Chief Justice of Nigeria, and dated July 3, 2012, President Jonathan stated thus:
“In conformity with Section 231(1) of the 1999 Constitution of the Federal Republic of Nigeria, as amended, which gives the President powers to appoint a Chief Justice of Nigeria, acting on the recommendation of the National Judicial Council and subject to confirmation of the appointment by Senate, I have the honour to forward the nomination of Honourable Justice Aloma Mariam Mukhtar, CON, CFR for confirmation as Chief Justice of Nigeria”.
Also yesterday, President Jonathan forwarded the names of Justice Kumai Bayang Akaahs (North West Zone) and Justice Stanley Shenko Alagoa (South South Zone) to the Senate for elevation from their current position of Justice of the Court of Appeal (JCA) to Justice of the Supreme Court (JSC) respectively.
In the forwarding letter, President Jonathan explained that the appointments “have been necessitated by the impending retirement from service of Hon. Justice Dahiru Musdapher, CJN, and Hon. Justice FF Tabai”.
There are presently 14 justices at the apex court bench, out of which only three are women namely, Justice Aloma Mukhtar (08/06/2005), Justice Olufunlola Oyelola Adekeye (2009) and Justice Mary Peter Odili (23/06/2011)