Homepages
Trending News
HomeEmbassy NewsRains of Emotions and Tributes as Mrs. Sadat Hassan and her immigration team says goodbye to Germany after concluding their tour of duty 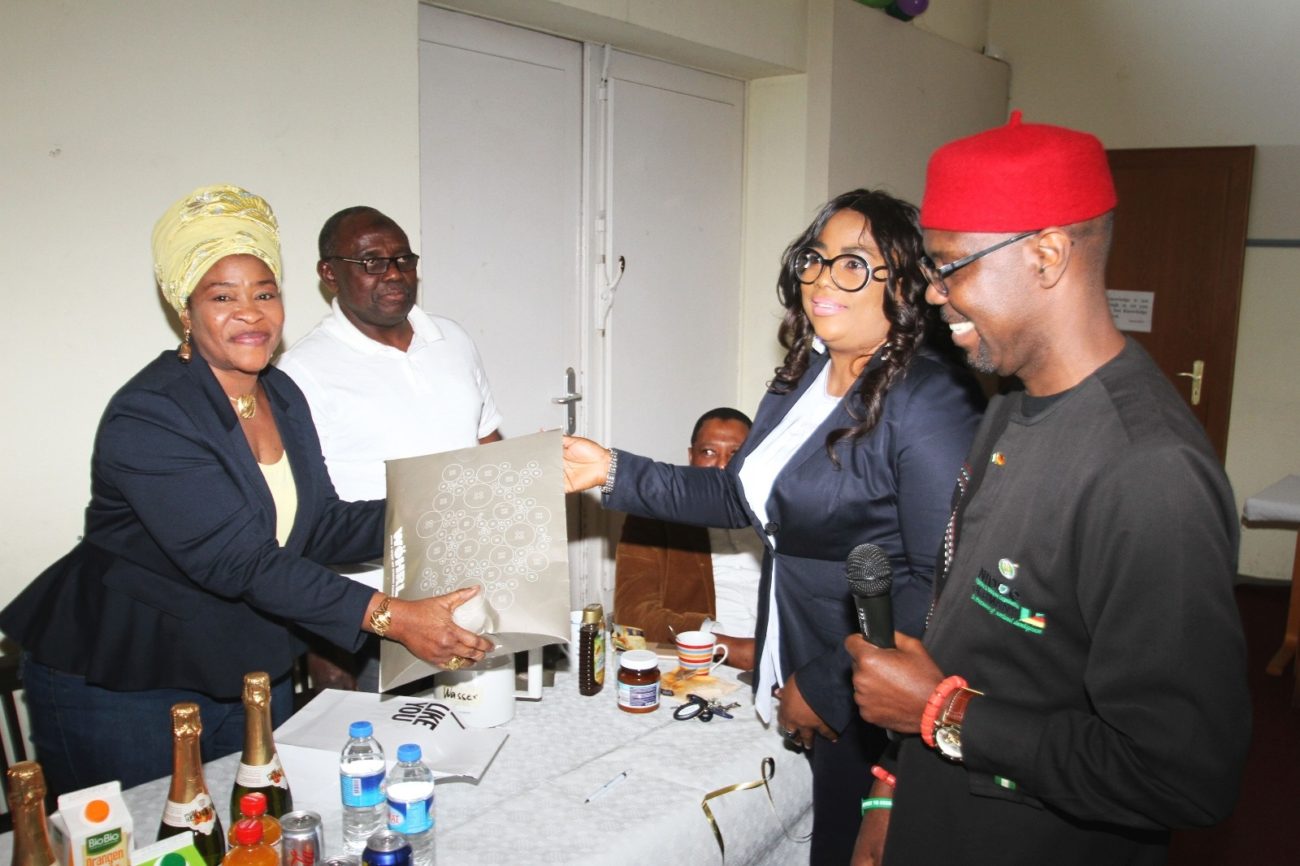 Rains of Emotions and tributes as Mrs. Sadat Hassan and her Immigration team says goodbye to Germany after concluding their tour of duty 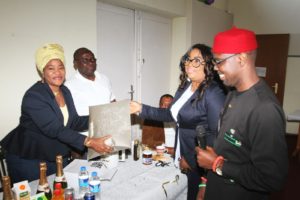 It was a marathon week for Mrs. Sadat Hassan and her immigration team (Mr. Innocent Nwkocha and Mr. Uche Onuoha) from the Embassy of Nigeria Berlin, Germany as they were hosted to one sent forth reception after another by friends, colleagues and Nigerian organizations.

Last Saturday, 25th March 2017 at reception Hall of Jesus Miracle Harvest Church Int., Koloniestr. 29, D-13359 Berlin, Germany, it was the turn of the Nigerians in Diaspora Organization (NIDOE) Germany to say thanks to Mrs. Sadat Hassan and her team by organizing a thank you reception.

The event was opened with the recognitions of guests by Ms. Mary Bruder of NIDO Germany, followed by a short prayer by Pastor Bismarck of Jesus Miracle Harvest Church Int , followed by another short Muslim prayer my Mr. Muyiwa.

Hon. Kenneth Gbandi, the immediate past President of NIDO Germany, who represented Mr. Kenneth Alaekwe, the Acting President of NIDO Germany gave the opening remark. Hon. Gbandi who is also the current Chairman NIDO Europe set the stage for short speeches by acknowledging the achievements of the current Immigration officers led by Mrs. Sadat Hassan. He recollected how Mrs. Sadat Hassan pledge to transform the service delivery at the embassy especially creating a section for consular services for Nigerians and for nursing mothers and their children. This according to Hon. Gbandi was surprisingly accomplished in a record time. This is in addition to accomplished visible deliverable in terms of service to Nigerians and non-Nigerians necessitated bestowing to Mrs. Hassan Nigeria’s most outstanding Leaders of the Year in the Diaspora (Germany) 2014, by NIDO Germany in recognition of her invaluable and outstanding contributions in re-positioning work value at the immigration Department of the Embassy of Nigeria Berlin, Germany and for her dedication to the affairs of Nigerians in Germany. 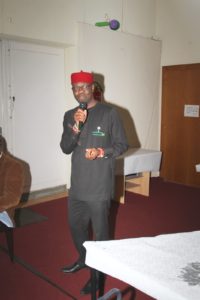 Hon. Gbandi adviced the incoming officers not only to emulate her footsteps but to supers the standard she had put in place. He also stated the spirit of the send forth reception is to send the signal that serving Nigerians in good faith is not only been noticed but also acknowledged. He joked that the fastest way to make enemies and lose your most valuable friends is to put yourself for public service to Nigerans.  On behalf of Nigerian professionals in Diaspora, especially as represented by NIDO Germany, Hon. Gbandi presented Mrs. Hassan with parting gifts. 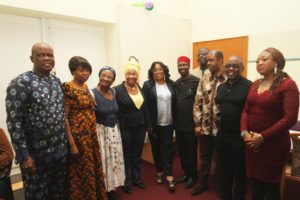 The tones were different, but the massage practically the same. They narrated their encounter and working experiences with Mrs. Hassan and gave kudos to her uncompromising dedication to her work and service to all Nigerians and non-Nigerians alike. Speakers after speakers also thanked Mr. Hassan for supporting her knowing pressures associated with her work. Her team were not let out too. Mr. Innocent Nwkocha and Mr. Uche Onuoha also expressed absolut satisfactions working with her, even though that means sometime extra hours in production of passport and attending to Nigerans long after official closing time. They pointed out that Germany served majority of European countries on consular maters due to the report and reputation of Germany Embassy efficiency on consular and immigration matters. All the speakers urged her to stay true to her calling while praying for her success and success of Mr. Innocent Nwkocha and Mr. Uche Onuoha in their future endevoures.

In her emotionally chocked voice and with tears in her eyes, she thanked the Chairman of NIDO Europe and the entire members of NIDO Germany for the wonderful reception and for supporting her work. She remarked that Hon. Gbandi challenged her from the first day in office on issues of consular and service delivery to Nigerians in Germany and she is happing that het work is speaking for her. She stated that the Award in 2014 by NIDO Germany further motivated her to give nothing but her best for Nigerians. She pointed out that without out the good environment provided by the Embassy and supported by her team she could not imagine how she could have succeeded. She gave special thanks to Mr. Innocent Nwkocha and Mr. Uche Onuoha for their cooperation without which she could not have achieved anything and concluded that the success belongs to all of them. She then introduced the New team lead by Mr. Ebong Imo, who had earlier assured Nigerians that the new team will not only continue the legacy of the outgoing team, but will build on it and asked Nigerians to give him and his team similar support. 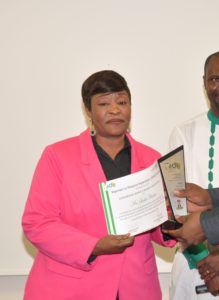 Born in the early hours of Monday, 16 December 1963 to the family of the late Alh. Abdul Kareem Sulaiman (aka. Sule) and Alh. Aishat Bolajoko Sulaima, she is the third among six children. Mrs. Sadat Hassan attended the Ireti Nursery and Primary School in Falomo, Ikoyi, Lagos and later the United Primary School for her primary school. For her secondary education, she started off at the St. Anthony’s Secondary School and later changed over to Ilorin Grammar School to complete it. After her secondary education, she attended the then School of Basic Studies of at Kwara Tech (Now Kwara State Polytechnic). She passed her Cambridge examinations in flying colours in 1983 after which she gained admission into the Ahmadu Bello University where she obtained a BA (Hons) in History. Mrs. Hassan later went for her Masters at the University of Calabar in 2000 after which she obtained a Masters Degree in Public Administration in 2002.

Mrs. Sadat Hassan joined the Nigeria Immigration Service in December 1989 as an Assistant Superintendent of Immigration and has now risen to the rank of Deputy Comptroller of Immigration. She has served in several capacities, starting from the Kwara Command, the Murtala Muhammed Airport, the Seaport, the Investigation Section in Alagbon, Lagos, the Aliens’ Section, Sokoto Training School, Zonal Headquarters Ibadan, and currently as  the Immigration Attaché I at the Nigerian Embassy in Germany. 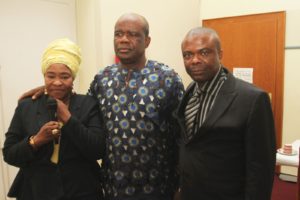 Mrs. Sadat Hassan and her immigration team (Mr. Innocent Nwkocha and Mr. Uche Onuoha) will be missed at the embassy.

Send Forth Reception for Mrs. Sada...