Buhari vying for Presidency is Greediness 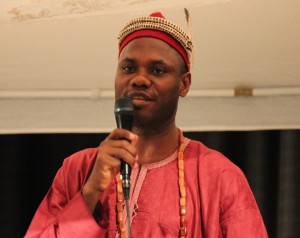 “Buhari´s silence on Boko Haram over the past years was frightening and his position on the 12 Northern states that passed Sharia Laws and who through this Act have technically seceded from the Nigerian State is not known…The irony of it all is that the  Sharia States partake in sharing VAT money, including money gotten from Breweries and Beer / Alcohol sales.”

A Nigerian Activist and prominent Community Leader in Germany, Chief Joe Mmeh has said that General Buhari may be a good man but cannot be a good leader under democratic dispensation and therefore enjoin Nigerians to reject him at the polls. The dynamics in a democratic system of government, is too sophisticated for a retired rigid military dictator like Buhari, he said. He quoted President Eisenhower, who once said “you don’t lead people by hitting them on the head. That’s assault, not leadership” He made reference to the saying that the best way to determine what a person will do under any circumstances is to find out what he did under similar circumstances in the past. And according to Socrates  “No man undertakes a trade, he has not learned” He stated that Gen. Buhari has no democratic credentials, has never been elected into any Office before and can never be a democrat no matter how hard APC is trying in repackage him now. What they are doing amounts to recycling an old wine in a new bottle, which does not change anything.

“Nigerians want to live in peace, freedom and in open Society. We do not want any Dictatorship, Sharia state or Totalitarian society. Under Jonathan we have free speech, rights of assembly, free press and improved infrastructural Development. He urges Nigerians and more especially Women to defend their Freedom by re-electing Dr. Goodluck Jonathan as the President of the Federal republic of Nigeria come February 14th,  2015”.

On Corruption, Chief Mmeh said that Gen. Buhari may not corrupt, but has surrounded himself with people who cannot be trusted by Nigerians, people who in other words, may pollute him with bad advice and selfish policies that may lead to corruption, for it is a  fact of life that one becomes like those with whom he is closely associated.

On Nigeria´s peaceful Co-existence, he stated that Buhari´s silence on Boko Haram over the past years was frightening and his position on the 12 Northern states that passed Sharia Laws and who through this Act have technically seceded from the Nigerian State is not known. “The other time, I read about Sharia police in Kano destroying Truckloads of Beer worth millions of Naira, beer produced in Nigeria and bought by Christian Traders to be sold in Kano. Are the Traders not Nigerians that are protected under our Laws to carry out their legitimate Businesses? The irony of it all is that the  Sharia States partake in sharing VAT money, including money gotten from Breweries and Beer / Alcohol sales. Leaders like Gen. Buhari needs to speak out and condemn ugly Incidents whenever they happen and cannot wait to do so only when they are seeking political offices”.

He repeated Obasanjo´s question “What did he forget in the State House that he is going back for?” Although Gen. Obasanjo had another Dictator in mind when he made the statement, it is necessary to direct this question to Gen. Buhari. The honourable thing for the old General to do is to retire, vying for Presidency three consecutive times from among highly educated and enlightened 180 million Nigerians amount to greediness and selfishness. He is not indispensable, as Pascal Emmanuel Gobry said “Healthy political parties realize that the cemeteries are full of indispensable men and rotate their troops.” It is wrong for APC to have chosen Gen. Buhari as their Candidate instead of younger generation of Nigerians.  31 years ago, General Buhari at the age of 41 was a Military Dictator ruling with Decrees and impunity as it pleased him, but 2015 is a different era, under democratic rule and at 72 now, there is no chance for him to learn democratic ideals nor has he any solution to the complex problems of modern day Nigeria.

Chief Mmeh said that Buhari is a hard-sell, he advised Nigerians not to experiment with any retired  Military Dictator / Rambo again citing how Gen. Obasanjo battered and nearly destroyed the democratic process in Nigeria during his so-called Civilian rule.