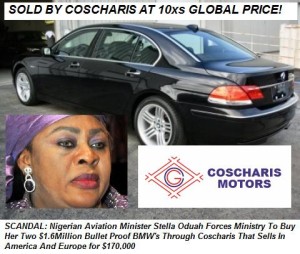 Nigeria battles to comprehend the level of corruption among officials of our present Jonathan government as re-highlighted by an award deserving, timely revelation SaharaReporters made, that our Minister of Aviation, Stella Oduah had the Ministry purchase two bulletproof BMW’s for 225 milion naira from Coscharis for her.

But as the news captions pour out over Stella, the air-plane crash record holding aviation minister’s shameless usurping from the Nigerian masses, an equally important focus of our attention and captions should be the Cabal owned Coscharis motors.

In actuality, the singular offence of Nigeria’s ministry of Aviation as is, is the diverting of our money to purchase anti-bullet vehicles for the minister; well that’s apart from them first lying and pretending that the story was a rumor.  But when the ridiculously inflated price of the vehicles is considered, the potential criminal at this time is Coscharis motors.

Coscharis motors, soon likely to be one of Nigeria’s so-called car manufacturers, with this deal, according to the report, supplied cars that sell in Europe and America for about $160,000 to our ministry for $1.6million. That is 10 times higher, aiming for the staggering 1000% profit mark.

Assuming Stella Oduah and the ministry were utterly incompetent and did not know they were being cheated, just like lots of Nigeria’s masses do not know that by buying Dangote cement for N1800 a bag at double and triple the price worldwide, they are being cheated by Dangote company who happily declares double profit quarterly returns; the culprit we have right now and as accountable as minister Stella and the ministry of Aviation is Coscharis motors. In addition to Stella and the ministry, EFCC must also investigate Coscharis motors. They should investigate the deal involving Coscharis supplying of the 200 cars to Nigeria’s First lady, Dame Patience Jonathan’s AFLPM summit. It is important lawyer Femi Falana clearly lists Dr. Cosmas Maduka and his Coscharis motors as a co-defendant.

What did Dr. Cosmas Maduka’s company sign off to? How do they sign up for such deals to help defraud our nation of the masses’ much needed funds? How often does he supply cars to our ministries at such inflated prices to fatten pockets? How does Coscharis feel when they aid and abet the ministry in stealing money meant for education, for security, for construction of roads, and divert these funds into their and the ministers pockets? Do these cabal-run companies have any sense of a conscience at all?

Then the likes of Dr. Cosmas Maduka, Aliku Dangote and other government camarilla Cabal will declare themselves businessmen and entrepreneurs and employers of Nigerian labor, whereas all they are is thieves in fancy suits with fancy operations that help the criminals in power transfer Nigerians wealth into all their pockets, then with bans and higher tariffs, compel Nigerians to buy from them and them only while pretending to be valuable for “employing” slave Nigerians to manufacture the products they sell at double and ten times the price.

It is well understood that with the more strict global regulations on money laundering, under the Obasanjo administration, more appealing methods of laundering and stashing wealth were developed. These included working with the cabal like Dangote, Otedola and the like, who helped to “sanitize” the money, invest it locally in industries given sole rights to maximize profits in money doubling and tripling and people placating companies, and then the money can be exported legally and used to buy-up and set up companies and properties all over the world. What the current administration is allegedly again doing through Access bank, AA. Rano Oil and Godbless Azibapu’s Azikel Group, etc. This is what we all witnessed, with documents, Coscharis involved in, thanks to this ground breaking report.

Currently cabal run companies like Coscharis, Stallion group and Elizade motors are in bed with Minister of Trade and Industry, Olusegun Olutoyin Aganga, lobbying for the minister to ban the importation of used/tokunbo cars, a 374,000 Nigerian employing industry, so their companies can complete the signing of lucrative manufacture deals and have an oligopoly of Nigeria’s car supply.

Are Nigerians really going to allow their entire automobile procurement options to be in the hands of this type of allegedly criminal companies who are willing to defraud the nation in cahoots with the corrupt ministries? Dr. Cosmas Maduka rightly said that what Nigeria urgently needs is an environment for the middle class to grow, power, roads, etc. How can we achieve this if big companies like his help the government defraud us of the money to establish cottage industries?

These type of greedy companies that sign off to deals that sell cars to Nigeria at 10 times the price, without even an atom of conscience, with government banning importation of tokunbo cars and the only possible competition; at what rates will they sell cars to Nigerians?

Some have suggested that the ministry should ban the importation of private jets, to encourage local manufacture. It is criminal that our government will sabotage our future and transportation options in the hands of their friends and bedmates like Coscharis, without first having provided us Subway and other alternative cheap public transportation options, as India and South Africa, the countries the minister reportedly studied, first did, in addition to first manufacturing cars, before dreaming of raising tariff’s in a pseudo-ban. The Nigerian house of representatives has already signed off on this tariff-ban, so as to raise the value of their shares with these companies.

A Nigerian reacted, that in this country, when a poor man steals an indomie food sachet from an individual, he is paraded and reprimanded in jail, but when our cabal and corrupt government officials steal millions to billions from millions of Nigerians, with the new and improved OBJ fancy stealing mechanisms, he is “serving his country,” and does not get paraded by the enforcement.

The thought of the destiny of Nigeria’s poor masses is really scary as the callous and insanely greedy cabal work with our government to handcuff and rob the nation dry.

Nigerians simply demand the same justice for the rich as it is for the poor.