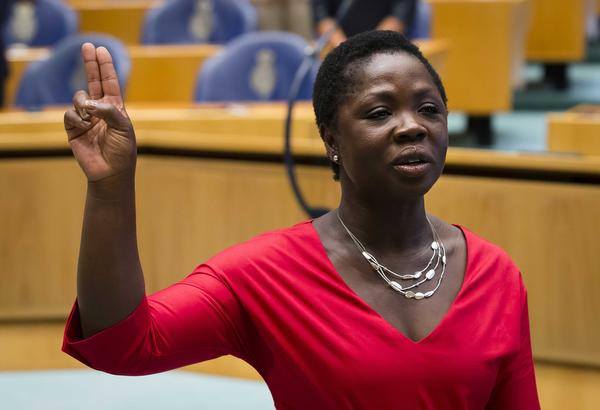 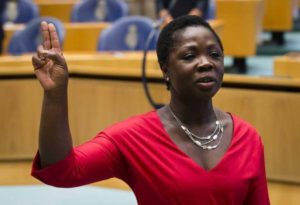 History was made at the Dutch Parliament as Amma Asante, Ghanaian born politician became a member of the Dutch Parliament to serve out till March 2017 when the next general election is expected to hold in The Netherlands
Her rise to this position has not come easy, since the last elections over four years ago (2012), she was left waiting because she narrowly missed direct election to the parliament because her party, Partij van de Arbeidre, (Labour Party) or known as Pvda fell short on the number of seats won to give Amma Asante a place in the Dutch Parliament. Despite doing well at the polls gathering over 4,500 votes, her party secured only 14 seats while she was number 15 on the list at the national polls.
Technically she stood a chance to make it to the parliament but that never happened until yesterday, 7th September 2016 at 1.45pm, the speaker of the Dutch parliament, Mrs Khadija Arib called the house into order and listened to the secretary to the commission confirming that Amma Asante has met all qualifications to be sworn-in as a member of 150 seats Dutch parliament.
With another colleague, Daniel van der Ree (VVD)  both of them were called into the house chamber and there they took their oath of allegiance to the country and to His Royal Majesty, King of Alexander of the Netherlands. With a loud cheer from the gallery, she was officially confirmed as member of Dutch parliament. 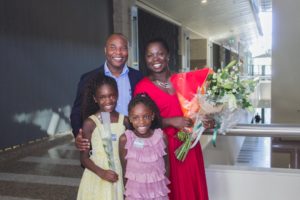 On hand to congratulate her was her husband, Pastor Emmanuel Baddoo, Senior Pastor of Triumphant Faith Chapel and their two daughters, two sisters and a brother among those family friends who witnessed the ceremony.
Already her presence was felt, after taken her oath of office, a shout of Hallelujah from the gallery had all heads turn towards the direction which is not often an occurrence in the chamber. The shout was from her Christian followers who accompanied her to the parliament to witness the inauguration.
After the inauguration ceremony, he was received and congratulated by other members of parliament. Among those who witnessed her sworn-in ceremony are Rev Emmanuel Koney, Pastor Elvis Iruh, Hashim Dagonon of African European foundation and Journalist Alberta Opoku among other friends. 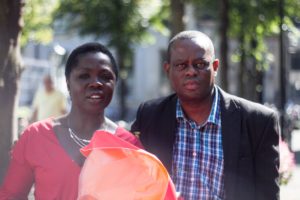 Amma Asante (44) disclosed her delight on this opportunity to serve and assured us again that she would not be a number in the parliament but she would contribute her ideas in advancing the courses that she believes in in collaboration with her party. She had earlier in the election campaigned on equal opportunities in various segments of society for all. Although she has six months to make an impact, she says it would be six beautiful months and keep all her chances open for next year 2017.
Congratulations to Member of Parliament, MP Amma Asante

By Pastor Elvis Iruh
The Voice magazine Publisher reporting from The Hague, The Netherlands