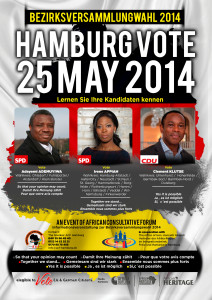 EU citizens resident for at least three months in Germany are legally entitled to vote and stand for election in certain German elections, specifically:

EU citizens voting in a European Parliamentary election in Germany choose to do so instead of voting in their country of citizenship. Information can be obtained from the voting office (Wahlamt) of the local town hall (Rathaus).

Non-EU citizens may not vote in Germany, but may be elected by foreign members of the local community on to the Foreigners’ Advisory Councils (Ausländerbeiräte). These are advisory boards for local politics.

Registering to Vote in Communal Elections

All those resident in Germany who have completed the obligatory police registration procedure (polizeiliche Anmeldung) and who are legally entitled to vote will automatically receive a voting card (Wahlschein).

If no voting card is received and a person believes they are legally entitled to vote, an application can be made either in person at the voting office (Wahlamt) of the local town hall, by e-mail or by fax but not by telephone.

The following documents are required:

Once the application to vote (Antrag) has been completed and approved, a voting card will be issued entitling the person to vote.

Local or communal elections to communal parliaments (Kommunalparlamente) take place to elect a mayor (Oberbürgermeister or Bürgermeister) for cities and towns or a chief administrative officer (Landrat) in rural districts. Mayors or chief administrative officers are usually elected for a term of six years, but this may differ from one district or Federal State to another.

A short time before the election a voting information card (Wahlbenachrichtigung) is sent to voters.

On polling day, go to the appropriate polling station taking:

The ballot papers (Stimmzettel) of all candidates and an envelope will be given.

The name will be crossed off the list of voters to show that the person has voted.

Anyone who is unable to vote on the assigned day may vote by proxy.

Accepted reasons for absenteeism are:

The voting information card which is sent to all those entitled to vote has a proxy request slip (Antrag) on the reverse side which must be completed and returned by post to the local town hall. It may also be completed in person at the respective voting office at the town hall. Some voting offices also offer the option of applying by e-mail.

In the event of sudden illness exceptions can be made for a proxy vote to be granted on the day of the election itself.

The following documents are sent to voters to vote by proxy:

Once completed, the red envelope must be returned by post to the local voting office (Wahlamt).

All EU citizens may vote in the European Parliamentary Elections. A citizen may only vote once per election and only from the place in which they are registered to vote.

By voting in Germany, the EU citizen votes for their choice of German representative to the European Parliament. And after voting in Germany the EU national loses their right to vote in another State of the Union (anyone doing so may be fined and imprisoned).