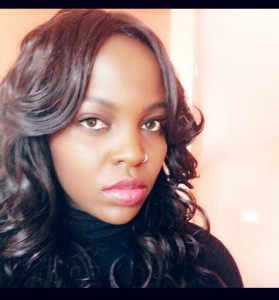 The answer is FURAHIDAY, or better put, the new face on African Heritage on Radio the voice of the continent in Germany. Her real names are Terry Atieno, born to the Luo community in Kenya in the 80s, the last in a family of three. She attended the Ng’iya Girls High School in Siaya County Kenya then proceeded to Maseno University also in Nyanza Province graduating with distinctions in Mass Communication and Mass Media.

As a Student she interned at the Kenya Broadcasting Cooperation (KBC) Television and Radio for a whole year where she tried her hands almost on all the areas of Production. She did not stopped at that, she acted in local Television Shows like ‘Vioja Mahakamani’ a Court Room Comedy then like a shooting star moved to the Kenya Television Network (KTN) a top private Media house where she was on Sports News Department also as an intern. Her most amazing experience before jetting off to Germany in 2005 was a strategic position at the Kenyan Royal Media Group. That was not all; she was also a Live Radio Presenter at Ramogi FM the most popular Radio Station among the Lake Nilotes of Kenya. She anchored the Daily Breakfast Show partnering with Sela Ayimba a very popular Radio personality among Luos. She also did a Saturday morning Kids Show and a late night Music show.

She was the brain behind ‘Pinywa Masani’ a programme that runs to date on the daily breakfast show “Wang’onyango “at the Station.