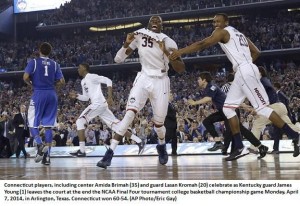 The UConn Huskies were the underdogs in this competition and no one saw their win coming.

Among the super UConn team was college freshman, Amida Brimah, #35, standing tall at 7 feet; the team Center. Averaging 2.3 shot-blocks, he is a powerful defensive center.

A certain day while he was in Ghana, then playing soccer and going to school, a certain Nana Baafi, who is now his guardian, saw him walking and called to him. Upon seeing how tall he was, Baafi who had played and coached Basketball in the US, told him he was wasting away in Ghana playing soccer and should move to the United States.

Living with Baafi in Miami Florida, Amida joined the school basket ball team and kept strengthening his game. His team mates described him as someone who at the time could not even catch a basketball. 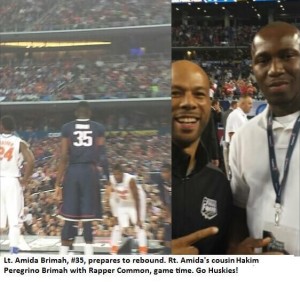 Baafi dropped Brimah at school earlier than class time, as he had to go to work early; this gave Amida, a teenager with dedication, early morning extra training time.

The latest West African basketball phenomenon, in the humble path of the Hakeem Olajuwaon’s, Amida Peregrino Brimah who comes from Ghana of a prestigious Nigeria origin family, had this to say about his experience coming to America:

“Back home, they raise you to be alone,” Brimah said. “Even though your parents love you and everything, they raise you, especially if you’re a boy, to be like a man as soon as possible. They teach you to cook. From the age of 5 you wash your own clothes — they don’t give you a lot of clothes. You don’t use a machine, you wash with your hands. So when I came here, it was easier.”

“The culture is different,” he said. “How they talk [trash] here, if you talk like that back home, it’s disrespectful. When I first got here and guys would talk to me like that, I got mad. I had to adjust to it.” [The Courant]

Son of Barikisu and Rashat Peregrino Brimah, Amida Brimah who has three sisters has a bright future ahead in the NBA, but wishes to complete college first before getting into the draft.

This was the 4th title for UConn. Another great African legendary player, Chukwuemeka Ndubuisi “Emeka” Okafor, from Nigeria who now plays in the NBA for the Phoenix Suns, was a title winning team MOP (Most Outstanding Player) at UConn. 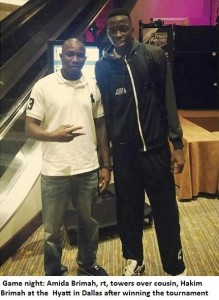 UConn was placed under a one-year ban in postseason, 2012 due to low academic pass rates. The team called itself ‘hungry;’ with dynamic team guard Napier bragging of their win: “This is what happens when you ban us.”

THE MEETING OF KENYANS GROUP IN BE...