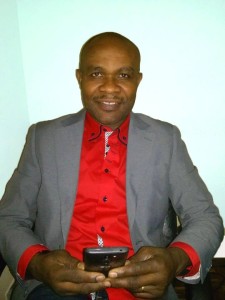 “He is a  Producer and Presenter with the Nigerian Europe No.1 online TV Channel. Promoting Artists, Businessmen and Women through TV Jingles, Entertainment Briefs, TV Coverages, Interviews”

Emeka Ojiaku Igwe, Popularly known as Tony TPrhymes Patrick is the Voice Achievers Award winning Producer. His Father Patrick Igwe, was a Warrior who fought and defended his people in terms of Fundamental Human Rights, Agression and Intimidation, therefore, Emeka’s Love for Representing the People must be genetic. He Started as a Secretary, Working with Some Legal Chambers in Lagos, Later Worked with a StockBroking House and Travel Agency, But along the line he has always loved Entertainment, His major then was Master of Ceremonies, Songwriting and Production. As a Secretary, he loved to write, has written two unpublished Novels. A Holder of Royal Society of Arts Certificate, London in Secretarial Administration. Working as a Secretary with the Late Gani Fawehinmi, he learnt to fight for the people and to always complete whatever he initiated. Being in Diaspora, he found it Interesting to represent the people in the area of entertainment. He is a  Producer and Presenter with the Nigerian Europe No.1 online TV Channel called Naija EU TV. Promoting Artists, Businessmen and Women through TV Jingles, Entertainment Briefs, TV Coverages, Interviews, etc. Founder, Producer and Organizer of the

The initiative kicked off on a Social Media known as Myspace.com in 2006 and fully came to reality 6 years ago, Emeka the Founder and Initiator invited many people to be part of it. He later started making trips to some parts of Europe to create awareness for the Platform, Interviewing and producing jingles for many.