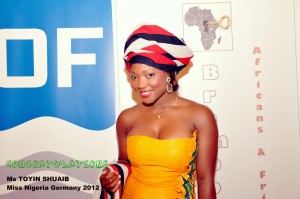 The panel of judges (Chidinma Joy Onwuka Okwumo, Barrister Iyare  Imasi,  Adeola Hilbel, director of Adeola Afro-Bristo,  Jude Ogunnaya, President Nigerian Community Germany, Hamburg and  Sab Udeajah, President NIDO e.V. Germany at the recently concluded Miss Nigeria Germany contest which took place on the 29th September 2012 in Hamburg, have, like all other competent judges who know their onions and made it glaring to us that in order to have a good chance of winning a beauty competition, a beauty contestant must possess some amount of charisma, apart from being beautiful, of course.

Call it beauty and brain. She must also possess some other qualities which include good poise, elegance and intelligence, without which her chances of even qualifying for the best five would be greatly reduced. However, all the finalist proved to have all making the judging processes even difficult for the judges. But a verdict must be handed over the duo of Obiora Nweke, Associate publisher African Heritage Magazine and Grace Grace Evaly, who moderated the event. 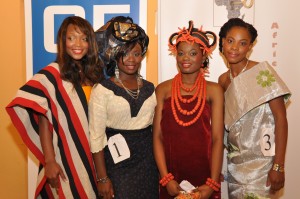 Toyin Shuaib, a 26 year old beauty from Ilorin Kwara state Nigeria, finally emerged winner for the night to become the New Miss Nigeria Germany for 2012/2013 and the 3rd since its establishment to mark the Nigerian 50th anniversary.

Toyin Shuaib was born 17th of March 1986 in Ilorin Kwara state Nigeria. Toyin’s both parent are from Nigeria. Her late father was a politician in Kwara state while her mum is from Osun state. Toyin finished her secondary education in 2003 and decided to  undertake a modeling project, so she joined Slylon Modeling agency in 2004 where she learned runway modeling and photographics, pageantry, and voice over. Working with Slylon modeling agency, Toyin did couple of billboard advertisement and one of biggest job was with “Samsung”. She also did lots of fashion shows with Gbenga Peters a popular designer in Nigeria.

In 2007, Toyin gained admission into Houdegbe North American University in Cotonou, Republic of Benin, where she studied Business Administration as her first bachelor degree. In 2010, Toyin decided to further her education abroad. She entered Germany in 2010 and went through the mandatory German for foreign students, an intensive German language course and parallel to that, she worked as a student assistant in Jacobs University Bremen. 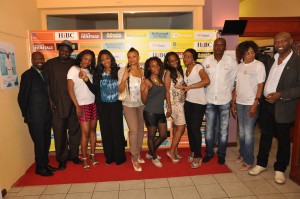 In 2011, GIZ “Gesellschaft für Internationale Zusammenarbeit” assigned Toyin to manage a big fashion show showcased at the Hanselife and “Afrika ist auch in Bremen” event where she presented her own first modern African designs which was a great success. Toyin is currently a student at Hochschule Osnabrück studying International business management. She is currently in her third semester.

Part of Miss Nigeria Germany Charity project is the realization of “Nigerman Care”. A project dedicated to assisting Nigerians in Old People Homes and in Special clinics across Germany. Toyin Shuaib needs your financial support, but above all she needs information about such Nigerians in care homes across Germany. She expressed her gratitude to the Organizers, co-contestants and to all the beautiful Nigerians and friends that turned out for the event. In a short interview after her crowing, Toyin promised to leave up to expectation, carry herself with humility and to bring dignity to the position of Miss Nigerian which she considered a call to service.

for full impression of the event visit: