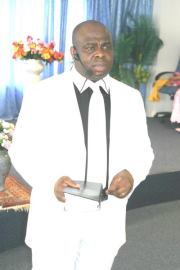 It will never occur to ones slightest imagination that the rich also cry, until one gets closer to them. On a serious note, there is no immunity against difficulties, troubles and pains for they prey on the rich, poor, old, young as well as the great and small.

Turn to the dallies and television, everyday the usual thing that will catch your attention is suicide, murder, divorce and other ugly tales that need not be told of in this beautiful 21st century. Even as you are reading now, there are many who are nursing such feelings. You may ask why? There are no suitable answers to this question. In other words, there is no justification for such acts. It however beats one hollow to realise that most of the people who opt for such ugly things choose to do so because the situations they found themselves are hopeless. But the truth is that there is no hopeless situation, only hopeless people.

Zero hours are just part of life. There is however the need for you to understand that you can turn them into hero hours. That a man or woman is a genius or great will be a mere statement if such people have not understood that life is about being determined to break through no matter how odd the situations may be. Henry Ford is quoted as having said that mistakes are necessary steps to success after he realised that he did not put a reverse gear in his first car. Many people, on realising that they have made mistakes, allow themselves to be weighed down. Instead of treating mistakes, disappointment or shortcomings as a temporal set back, they treat it as a monument. If Ford had done so, he wouldn’t have founded one of the biggest motor companies in the world today.

A man arrived at his business place where fire has blazed through millions of dollars of his life investments. As he helplessly watched friends and colleagues bemoan their fate and decry the cruelty of the fire, he refused to join the wagon.  Instead he sought himself a placard and boldly wrote, “Every thing lost except wife, children and hope. Business commences as usual tomorrow”.

What a way to encourage oneself. Have you lost anything that gives you joy? Wife, husband, job, business, friend or relative and you think it is the end of the world? You have got it all wrong. There is a greater tomorrow. Put yourself together and have hope because until you are fired, you may not be hired. Things may be very hard. Times might be very difficult. Never the less, history has never been without, “Once upon a time or It came to pass”. If you do not give up hope but continue to pursue your course to attain a height in life as well as remain focused not minding the Pull-Him-Down holders and their verdicts, then very soon, you will sing a new song remembering once upon a time and how it later came to pass. You will surely make it.

Darlington Jacobs is the pastor of Chapel of Believers Christian Church Hamburg and the author of the following books.