Homepages
Trending News
HomeCurrent EditionThe Only Black Survivor of the Concentration Camp of Buchenwald is dead: In Memoriam of Gert Schramm (1928-2016)

The Only Black Survivor of the Concentration Camp of Buchenwald is dead: In Memoriam of Gert Schramm (1928-2016) 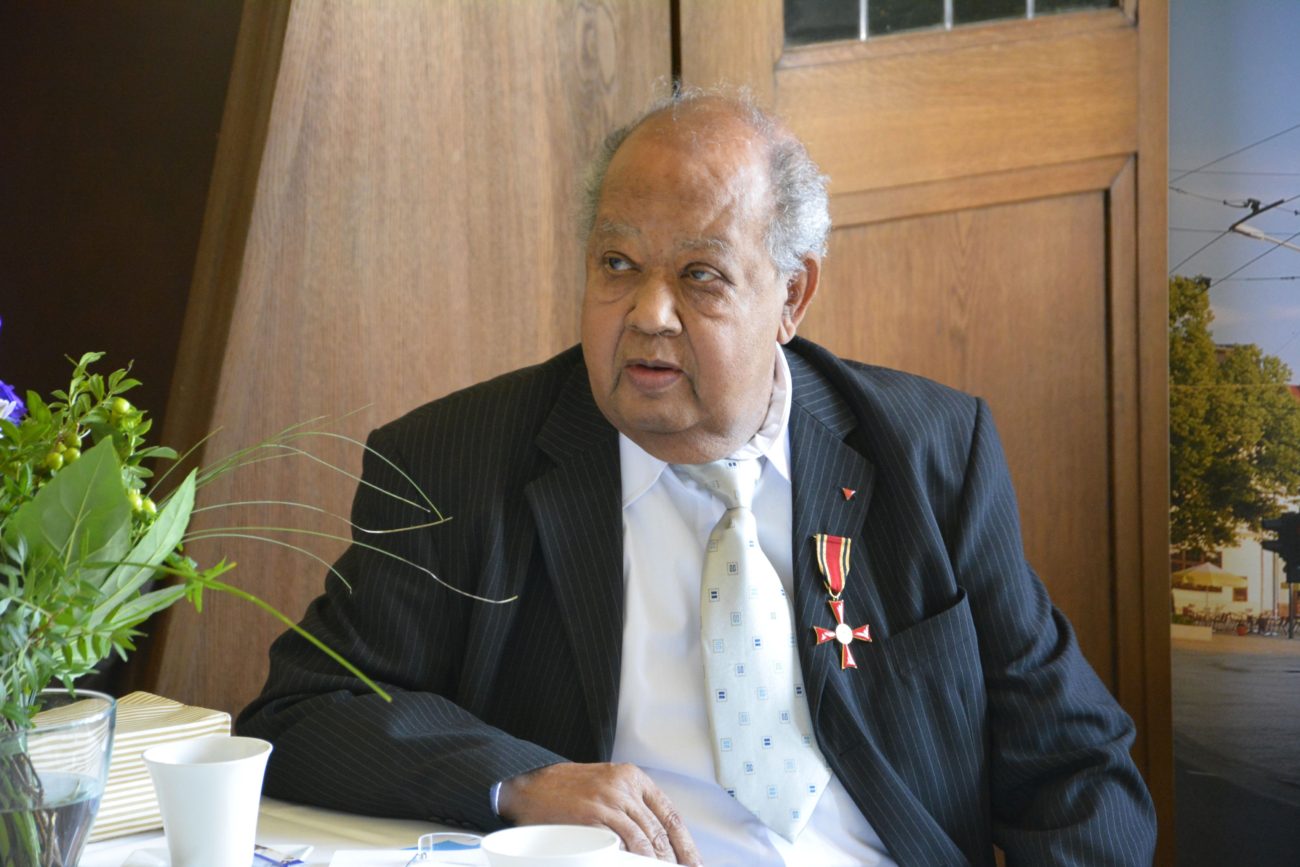 The Only Black Survivor of the Concentration Camp of Buchenwald is dead: In Memoriam of Gert Schramm (1928-2016)

Gert Schramm, one of the last contemporary witnesses of the ugly moments of the German History has passed on.  “ Who’s afraid of the Black Man?” One of his popular book will remain in our memory. 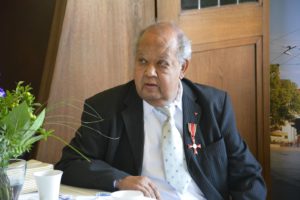 I have been very saddened to hear that Gert Schramm passed away on April 18, 2016, following a long period of sickness. He was buried on April 30, in Eberswalde, where he had been living for decades. Gert Schramm was born on November 25, 1928, in Erfurt, from a German mother and an African American father. At 14 years of age, he was arrested by the GESTAPO under the Law on Racial Infamy enacted by the Nazis. First, Schramm was incarcerated in several prisons, from May 1943 to July 1944, and then he was deported to the concentration camp of Buchenwald where he became inmate number 49489.

At the end of the war, the Americans gave him the responsibility to manage the food store. This was a unique opportunity because there was famine in Germany at that time. Ultimately, he became a translator for the Soviet Allied Forces in East Germany, then a miner “porion” in France, in Liévin (Pas-de-Calais Region). Upon his return to East Germany, he renounced a career as a Political civil servant and worked in the mines, then in transportation. In 1986, he created his own taxi business in the Dutch Democratic Republic.  He became the President of the Association of taxi business owners in Eberswalde and the Vice-President of the Committee of ex-prisoners in Buchenwald and a member of the Working Group on the Concentration Camp. 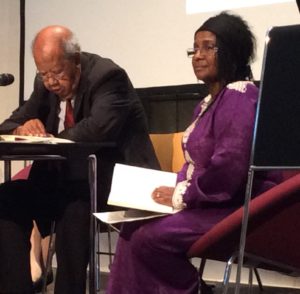 Schramm left the labour force after the German Reunification in 1990. On November 25, an Angolese worker named Amadeu Antonio is savagely assassinated by Skinheads in Eberswalde. This tragic event marks the beginning of Gert Schramm’s fight against racism and his prevention work in the schools. As he was telling our students of Ohm high school in Erlangen, on March 20, 2012:

“I wish our youth will never give in to these racist Nazi thugs and they won’t heed their views filled with hatred and racial discrimination”.

His autobiography entitled: “ Wer hat Angst vorm schwarzen Mann?” (Who’s afraid of the Black Man?) still fascinates the public. He has dedicated it to “the youth of our country for they are the guarantors of the future”.  He leaves to the generations to come a message of peace and reconciliation. 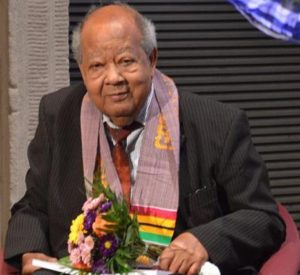 On April 25, 2014, i.e., almost 70 years after prisoners were liberated from the concentration camps, the German government has awarded him the highest distinction in the National Merit Award order. i.e., the «Bundesverdienstkreuz am Band» (The Merit Award Cross with the scarf).  During the award  ceremony, the mayor of the city declared :

“You have the merit to have pioneered making our youth aware of the German History. I thank you for contributing to change the political environment in Eberswalde during the last 25years, so that today we can live in an open and tolerant city”.

This late distinction honours the commitment of the only Black survivor of the concentration camp of Buchenwald.

On September 19, 2015, Gert Schramm was one of our guest speakers for the “Black History Weeks”. The theme of these weeks was: “History forgot them: German Blacks during the Nazi Era”. He led an historical  meeting which brought together, on a panel, the three Germans of mixed racial heritage who survived the Nazi era, i.e., Gert Schramm, Marie Nejar et Theodor Michael. It was the first time he was seeing other German Blacks who had been victims of Nazism and he did not know them. This was his last participation in a cultural event.

Before we met, he was convinced he was the only Black person in Germany who had undergone the wrath of the Law on Racial Infamy.  He did not know there were also hundreds of Black Africans, West Indians, African Americans and mixed heritage Germans, but also Indonesians, Sinti, Roms and Maghrebians who had been incarcerated in the concentration camps in Germany, France and Poland because of the colour of their skin. The Nazis lumped them all as Black people. 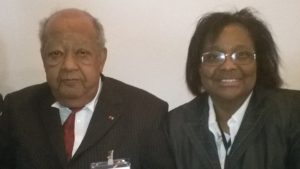 ©Pierrette Herzberger-Fofana and Gert Schramm – Buchenwald 12.4.2015.- Official Ceremony commemorating the 70th anniversary of the liberation of the concentration camp of Buchenwald.

The meeting in Erlangen was very filled with emotions for all. It availed the survivors an opportunity to give their testimony of a past filled with anguish and pain and the public, an opportunity to gain awareness of an era when deadly madness had prevailed, and to meet with eyewitnesses of that time. These live testimonies of survivors of the Nazi terror overwhelmed us. As he was remembering his stay in Buchenwald, Gert Schramm could not control his tears. He was sobbing when he said: “We, the survivors, will not stop fighting until the last Nazi is judged”.  Gert Schramm was sobbing so hard he was no longer able to keep enumerating his sufferings in the concentration camp of Buchenwald. The meeting had to be interrupted because it was becoming unbearable to see an old man so shattered by the tale of his own life that he could not stop sobbing.

It was a great privilege to have lived history with witnesses of this sinister past.

I have lost a sincere friend, a committed man who did not hesitate to travel hundreds of kilometers in order to share his message of reconciliation. These past years, he has toured almost all of Germany for this purpose.

On April 30, 2016, I attended the very private funeral ceremony  of the only Black survivor of the concentration camp of Buchenwald.  He was laid to rest in the Eberswalde cemetery. 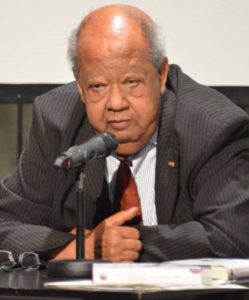 Gert Schramm, one of the last contemporary witnesses of the ugly moments of the German History has passed on.  A voice has gone silent, a humanist has bowed out. The only Black survivor of the concentration camp of Buchenwald is now part of our  History. Our faithful friendship is no longer but memories and a dedication reminding that he viewed me as a “soul sister and a good friend” I keep him a very special space in my heart.  In the name of all those who have known, loved and respected him, I thank him for sharing with us a painful chapter of his life.

I honour the memory of one of the last important figures of the 20th century History.

To his grieving family, his children, grandchildren and great grandchildren, and especially his granddaughter who, to the last minute, has taken care of him, I express our most sincere condolences and sympathies.

May he rest in peace and enjoy eternal happiness!

Translated in English by (Gisèle Seck)