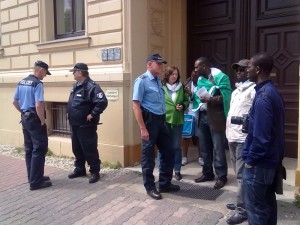 On 14th June 2012 the gates of the Embassy of Nigeria Berlin was closed and protected by a team of stern looking German Policemen. At first, one was lost as to the real reason for heavy presence of the Police but on a closer look, the non-stop blaring of music and intermittent choruses of the Concerned Nigeria Group explained the anomaly. Essentially, the police was there to ensure that the right to protest was not denied. African Heritage Magazine Germany  was on ground to cover the event purely as a media establishment.
It was an appointed date though turn-out was somewhat on the low side, probably because of a few logistical shortfalls according to the organizers. A summation of their reasons for the demonstration is wrapped around the administrative style of the current Nigeria Ambassador to Germany – Amb. Abubarkar Abdul Usman-which they listed in, demands thus; 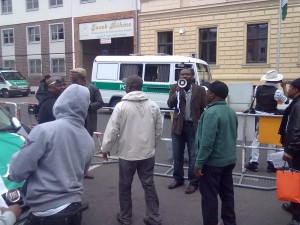 “Nigerians must have access to their leaders”, “ End to mobile consular hearing”,
“Better treatment to Nigerians resident in Germany”, “More consulates in Germany”
“Nigerian government must stop lip service to the fight against corruption”.
“Pension funds scandal must be investigated”.
“Nigerian government should stop environmental pollution going on in the Niger Delta area
(Oil MNCs should be responsible for reparations)”.

“Nigerian government should use oil money to develop Nigeria” “Stop corruption in the energy sector”, “Security situation in Nigeria: Stop Boko Haram and kidnappings”, “Passport Payment system must be accessible to all Nigerians”, “Stop divide and rule system Amb Usman”. 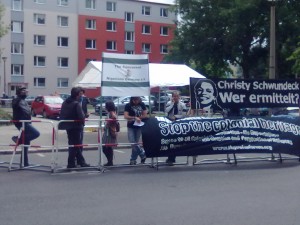 According to the leadership of concerned Nigerians and Elders (Mr Lewis Ehiwario, Dr. O. M
Akinyemi and Dr Med  D. Ubani), the refusal of the Ambassador and the officers of the Nigerian consulate in Berlin to have meaningful talks with them on pertinent issues as raised in the demands prompted the demonstration. They berated an administrative system where the representatives of the people distance themselves from people they are supposed to represent.

The Embassy
Officials at a point came out to hear directly from the group. The Ambassador was not available but Minister  Rabiu Shehu (Deputy Ambassador) led a team of officers of the Embassy of Nigeria to hear from the group. The Embassy responded that they do not deal with demands but would attend to requests. Instances of requests in the past like the reduction of consular levy from 50 Euros to 40Euros were cited as a normal path to follow. In response, the Chairman of the Concerned Nigeria group insisted that if their demands are not met, the campaign would continue. 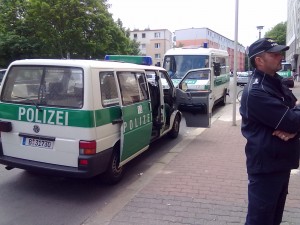 It should be mentioned that the demonstration happened without any ugly incident and both the group and the Embassy was responsible in their approach to one another although a lot of answers to questions were deliberately circumvented or simply ignored.

Nigerians at war with Embassy: Pro...