The killing of Christy Schwundeck: One Year After ?

The killing of Christy Schwundeck: One Year After ? 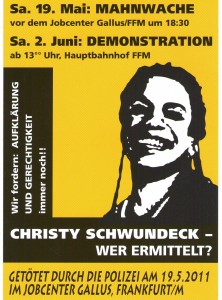 The killing of Christy Schwundeck  (infomation also in German)

She lost her previous job and had to apply for Hartz IV welfare support. On the tragic morning she went to the job centre to enquire about her unemployment benefits. The rest is now history. A pistol was fired at Christy Schwundeck and she later died from the injuries she sustained.

Frankfurt public prosecutor closed the preliminary investigation mainly on the ground that the police officer who fired the fatal shot had reacted in self-defence.

Injustice anywhere is a threat to justice everywhere, therefore Silence should not be an option and that is why we will protest any unlawful killing and demand justice and accountability.  Show your concern on the 19th May  at Job centre Gallus  from 18:30 and 2nd June  Demonstration at Haupbahhof FFM respectively

Full  information in German language below:- 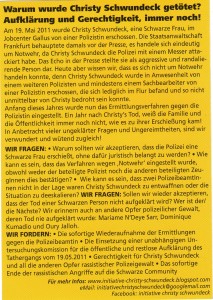 Victoria A. Gbandi -The Ezinne (Go...