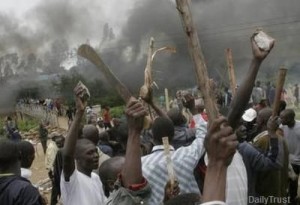 The rise of the civilians against terror took the Boko Haram saga to a new turn in the early hours of Tuesday morning when citizens of Rann, headquarters of Kala-Balge local government area, Borno northeast, who had fore-knowledge of an impending Boko Haram attack, decided not to remain sitting ducks but prepared for battle.

According to reports we received from Civilian sources in Borno, over 400 Boko Haram terrorists stormed Rann and neighboring villages in the early hours of Tuesday, with their usual convoy of hilux trucks, motorcycles and APC (Armored Personnel Carriers) only to meet villagers ready for them this time. The civilian villagers pounced on the terrorists with mere rocks, bows and arrows, local Dane guns, swords and “charms,” but as we have earlier reported, Boko Haram are more frightened of Civilian-JTF than they are of the Nigerian army, and run from the civilians even if they—the civilians—only have knives. The battle raged till the sun came up and ended with the civilians killing over 200 Boko Haram terrorists, capturing several prisoners and recovering several of their vehicles.

From an account of a civilian who participated in defending the neighborhoods, as reported in DailyTrust, “Our people also recovered over 70 motorcycles that the attackers came with. They also collected 2 Hilux vehicles and an Armoured Personnel Carrier (APC) while some of the attackers were captured alive.” dailytrust.info/top-stories/23962-200-insurgents-killed-in-kala-balge-by-villagers]

This amazing victory of good over evil, promises a new direction in the war against terror that has wrecked hundreds of farming villages in the north of Nigeria in the last four years, largely unchecked by State security. Civilians determined to arrest a situation they believe the Nigerian security services has permitted to destroy their farming villages in various towns in the north east, have apparently decided take up a fighting posture against Boko Haram terrorists; no longer waiting for a military response that hardly ever comes. 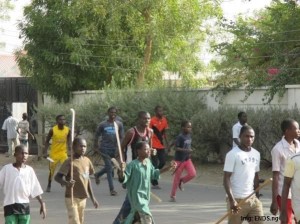 Last week, Boko Haram terrorists ravaged Gondura Ngala town, freely without any hindrance from the Nigerian military drafted to the north, and decimated the entire town, killing over 300 residents. On April 14th, Boko Haram stormed Chibok and abducted over 200 girls. In that episode, Amnesty International reported that the Nigerian security services were fully informed of the impending attack, by civilian vigilantes and other Intel, several hours prior, yet did not alert or defend the village nor engage the terrorists for a full eight hours of the abduction, looting and destruction of the village.

A mother from Chibok reportedly told CNN, that “if the army is not ready to fight Boko Haram, then we will fight them ourselves.” Apparently that day has come.

The Civilian-JTF and ENDS.ng civil rights group is pressing the Nigerian government for the civilians to have the right and government support, to bear arms, to end the terror scourge once and for all. The government is yet to officially respond to this urgent request as villagers remain at the mercy of Boko Haram terrorists.

The Shehu of Bama is reported to have ordered his citizens to go get guns, after his town was completely decimated twice by Boko Haram terrorists with no military response for the full eight hours of carnage. More towns are expected to follow suit as the nations leadership sleeps and permits terrorists the largely unhindered freedom to operate, massacre and destroy Nigeria’s farmers and northern farming villages.

Boko Haram cannot and must not be...

Diaby Karamba: African Man of the...