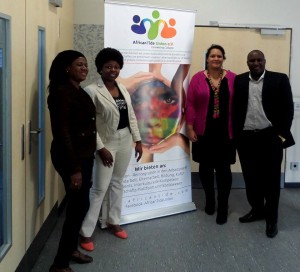 Over and Over, non-governmental African organisations around Germany have shown in different ways that they are capable of being organised. They show this in a democratic way… election and results! This is exactly what the African Umbrella organisation of NRW has accomplished with the support of Dr Erick Tambo the last president of the umbrella organisation and his team.

They have being able to elect and present a new president. The organisations’ decision was based on “who will deliver a professional service to the African community in NRW.” And the president is RosaLyn Dressman. A Journalist training, worked as a software Documentation person for an international software company, active as the president of AfricanTide Union organisation, Secretary of the Nigerians in Diaspora organisation Germany and she is also a Librarian. RosaLyn Dressman is 39 years old, married with 3 children, lives in Kreis Recklinghausen, at home in Dortmund and very active in the communal integration politics of Africans in Germany.

“I am honoured to take the reins of the ADV (afrikanische Dachverband NRW) as president,” RosaLyn said. “ADV began as just an idea a little more than ten years ago, and I joined the organisation in 2010 have been fully committed to its long-term viability and success, and remain committed to those goals today.”

As President of ADV, RosaLyn sets an agenda that includes integrated professionalization of the African associations input campaigns, extensive networking and media programs in all major cities in NRW and localized resource pool for African associations and African people in general. Together with her new team and the cooperation of the government of the NRW, RosaLyn will assume these new national roles while ensuring the success of ADV’s important program.

I implore all Africans, everywhere you are in NRW, please remember that ADV needs your input and participation. Call us, register your associations (if you are not yet registered) and join us as we present Africa to the world.

CBN: The Poverty In Sanusi Lamido...