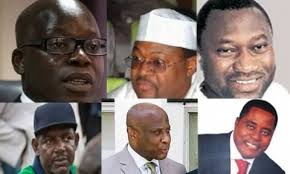 A responsible government gives incentives to potential manufacturers to encourage them to venture into valuable and competitive production. Not Nigeria. In Nigeria the government compresses the masses and phases out the middle class to entice the cabal and potential investors in the cabal’s firms. Effectively creating an elite monopoly who, unregulated can and will then take advantage of the oligopoly to peg prices for equal or substandard goods at values as high as they choose. This is an ‘enticement’ system.

In enticing the oligopolists, the government either purposefully allows the dilapidation of federal government industries, to encourage and assist the cabal establish with guarantees of insane profits; or the government as is in this case and in the case of the Nigerian cement industry, bans importation by competitors, raises tariffs or ‘removes subsidies’ to forcefully entice the cabal into venturing into manufacture while simultaneously shooting up the worth of their investment value. Nigeria’s run-down oil refineries and the sprouting of a Dangote refinery is an example of this in action.

Taking Nigeria’s cement case as a study example, with the Obasanjo, Yar’Adua and Jonathan government supporting the extinction of all medium and large competitors and importers of cement, a cabal of note, Dangote has been assisted to rise to a status of global wealth recognition, via monopolizing the market, fixing the price and selling 87% of Nigeria’s cement for construction at about double the global mean, as elaborated in recent newspaper articles.

The reward for the government for sabotaging and selling the people to the oligopolists, in terms of campaign sponsorship and other financial returns is well known and documented. Just like democracy, privatization is only useful and good when it is regulated by responsible authority. Otherwise, it becomes the worst tool of suppression and oppression.

It is not by force we manufacture. What people need for growth in a global-village new market, is the most competitive price for quality product. Nigeria only needs to manufacture what it has a comparative advantage over. In any case, all players should have a level playing field. The cabal and small businesses have similar set-up and running challenges. The government must encourage all industry equally or encourage none. If the price for electricity makes us pay twice the global mean for the product, then we would rather import it. In any case, this is not the case with Nigeria’s cement monopoly…as the outrageous quarterly profits of the company go to show.

Development can only be achieved by promoting healthy competition in Nigeria. The US manufactures Apple… in China. The US however allows healthy competition with other computer and telephone manufacturers. Apple products stand out by public appeal and quality of product and are not enforced on the people. This is how citizens who are respected and valued are treated. Whatever Apple must do to keep its cost competitive, even if this includes manufacturing abroad and importing—as they currently do—they must do, and they do do. The market is free and fair, and the government does NOT force US products on the people and at prices chosen by the manufacturers.

Not too long ago, US car manufacturers faced bankruptcy compounded by steep competition from Japanese cars. A bailout plan was initiated to assist the US manufacturers. They were also sent to the drawing board to ensure that their cars were redesigned to compete with Japanese cars. GM rose to the task and made new cars that had record sales. This is the business model employed by the developed world. We realize that labor is cheaper in Japan, however the more expensive labor in USA did not make the US government enforce a monopoly in favor of US manufacturers by banning importation of Japanese and German cars as Nigeria does with Cement and proposes with cars. With the Jonathan administration proposing a Tokunbo car ban, their intention is clear as is their impetus.

The cabal, which includes the likes of Aliku Dangote, Femi Otedola, Olusegun Obasanjo, Tony Elumelu and in this particular case, Elizade motors, most likely sat down with the government and looked for what loophole to raiding the money of the masses and taking over available small businesses they had not yet usurped.

Tokunbo cars, a 3 billion dollar industry offered great promise. Elizade motors, Nigeria’s Toyota supplier has always lobbied for the Federal Government (FG) to raise tariffs on importation of Tokunbo and new vehicles. The FG has done so, yet, despite this, imported new Toyota cars still sell in Nigeria for much less than the price offered by Nigeria’s Toyota, and are of better quality.

A 2014 Toyota sells to the US customer for $20,000. All importation costs including the import duty of up to $10,000 added, this car still sells in Nigeria for up to $10,000 less than Nigeria’s Toyota sells it. The US spec. car is also of better standard and quality than the ‘Dubai’ version that Nigeria Toyota sells to its people. It beats the imagination why Nigeria will not look for means of protecting its people and promoting indigenous sale and manufacture by supporting and regulating the indigenous process, but rather seeks to destroy the remaining small businesses and further impoverish the masses, while enticing and supporting a handful of oligopolists to billionairedom.

There are industries where a wise government can ban importation at this time that will prove useful and beneficial to the Nigerian economy. Nigeria spends more than the 3 billion dollars spent importing Tokunbo cars, importing foreign clothes. Nigeria has tons of available small and medium scale clothing industries. Manufacture of this already exists and can benefit from government encouragement. This however is a competitive and open industry and not one the cabal can monopolize. It is not surprising that the ban on this importation is not taken serious. From an economist point of view, a total and harsh ban on the importation of pre-made clothes would be the next best step to boosting Nigeria’s economy. It will also aid the development of the fashion and clothing industry to a level of rewarding exportation.

From the public reaction to the ban, I am convinced that this is dead on arrival. In the event that the government further wastes our time keeping this nonsense alive and distracts us from the emergency crises of our roads, education sector, security and other pressing matters. I am sure Nigerians will take to the streets. And this time, Nigerians will perhaps not aim only for the reverse-it mark.