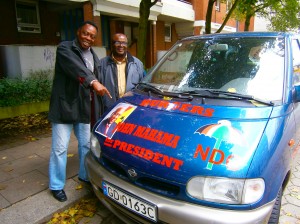 The newly formed “NDC German -campaign Team” under the auspices of   NDC – Germany, which of cause, forms the umbrella of all registered local unions of NDC branches in Germany, has over the weekend organized a grand jamboree in Hamburg to outdoor brand new buses with embossed NDC logos ready for onward shipment to Ghana in support of President Mahama 2012 campaign trail.

According to special communiqué released by the committee, the Buses shall be put at the party’s national headquarters during and after the general elections to serve the public, especially the party members and sympathizers from the Diaspora.

Besides, the Hamburg branch of the party has also indicated their programs with all means and necessary arrangements to dispatch tens of dozens bail of printed T-Shirts and other party souvenirs to the party headquarters to cushion logistic supports.

Old people have the adage that, No-one points his left finger to the direction of his birth route (or) a bird at hand is worth ten times in the bush. 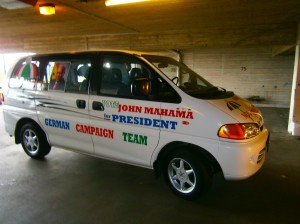 It is presumed that, most Ghanaians living in the Diaspora either by the virtue of their naturalization or inability to have participated in the last voters registrations exercise would not be eligible to vote. However, all indications have shown that, election fever has caught most of the NDC party supporters and the sympathizers, as such, most have expressed the readiness to book their flights to witness the upcoming general elections that would automatically retain the NDC party to power.

Present at the ceremony were the campaign team responsible for “President Mahama 2012 Campaign trail ” in the persons of Okyeso Kwabena Nyamekye (prime architect), Roland Raji, Samuel Enoo (aka)  Dangerfield, Peter Dekportor and Karim Abila, whose brilliant initiatives came about to effect the purchase and the art / design patterns of the campaign vehicles.

Also at the event were: delegations from various NDC Germany branches were there to grace the occasion.

In another development, the NDC Germany communication Team however endorsed and received the keys of the vehicles for and on behalf of the National and Branch Executives of German NDC nationwide and expressed their profound gratitude for the gesture. The team promised to follow-up the clearance and the subsequent formal presentation scheduled to take place in Accra.

Furtherance, the communication Directors however, used the occasion to address the gathering and stated that, “though the fact that you do not have the franchise, you however have influence over your relatives. Persuade them to vote for Mahama!! Your moral and financial contributions have upgraded your authority back home”.

The communiqué urged all party members and sympathizers to remain calm and pray for peace. In the wake of recent separations, we would like to console every one that, “with or without former First Lady Nana Konadu Agyeman-Rawlings and her cohorts, the ruling National Democratic Congress would emerge victorious in the December polls”.

The statement continued “Considering the numerous developmental achievements and ongoing projects by the NDC Government, – to whom shall we entrust these projects to effect its completion and render genuine accountability?  Count on President Mahama – popularly known in the Diaspora as (Joshua of NDC and Sompahene) who is regarded as unifier, listener and an ordained ruler. He has the know-how, the integrity and the capability to take Ghanaians across the Jordan River to the Promised Land comes December 2012”.