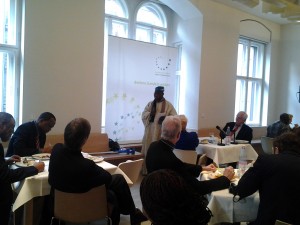 On Tuesday 12th February, the Humboldt-Viadrina School of Governance through Prof Peter Eigen (Advisory Board) and Gesine Schwan (President of Board) held a luncheon with Rtd. Gen Obasanjo who delivered a paper on” Africa and Good Governance”.

Like in every event the ex-president of Nigeria attends, this was a packed forum with Nigerians and friends of Nigeria from the academia, business and public services. Prof Eigen started the day with an eloquent introduction of his friend of 25years and churned out some details about their joint efforts that resulted in the formation of the global anti-graft agency known today as Transparency International with Headquarters in Berlin-Germany in May 1993.

When he Introduced his paper , Chief Obasanjo reiterated the good experience of working  with Prof Peter Eigen mainly through hopes , expectations and shattered aspirations but ending well in the form of  the fruitful establishment of Transparency International. He emphasized on the dilemma of being Nigerian president when Transparency International rated Nigeria the 2nd most corrupt country in the world and the challenges it presented to him. That was why his first bill to the Nigerian National assembly was for the establishment of ICPC ( Independent Corrupt Practices Commission) with Justice Akambi as the head. The bill received vigorous resistance by the National assembly .It eventually passed when he insisted and became a prelude to EFCC, and recorded much success  he concluded.

Through a decent analogy of pre-colonial and colonial African experiences, Obasanjo’s paper mentioned the existence of set out rules and regulations similar to contemporary government system before colonial incursion. According to him, African societies were making relative progress no matter how little before colonization. He regrets the resort to putting all the blames for African under-development on colonial experience.

His presentation dwelt mainly on Post-Colonial Africa mentioning the emergence of independent Africa states starting with Sudan in 1956,Ghana in 1957 and Nigeria with 12 others in 1960 as a development that occurred during the cold war. These independent states he said from the on-set, encountered three major challenges;

1. Resentment of Colonial power or anti-colonization: The elite that emerged from the independent struggle had resentment for colonial power maybe because some of them suffered neglect and in some cases, incarceration in the hand of the colonial masters.

2. Alternative Ideological Systems probably fueled by the cold war of that time: The period of colonization was almost entirely a product of capitalist economies resulting in resentment that led, the African elite that inherited independence  to romance with  the idea of socialism and communism in societies that had capitalist structures.

3. Inadequate exposure, inadequate training and inadequate tutelage of the elite on administrative methodologies. He gave an example with a story told by Julius Nyerere of Tanzania who as a teacher formed and led a political party while still a teacher and continued till he became the Chief Minister. Nyerere got basic lessons from the colonial masters on writing official letters with Y.E inscription and got so used to it that even while minuting to his secretary on one occasion, he initialed Y.E to her. The secretary was the one who informed Nyerere that he was the only person in Tanzania of those days that could be addressed with Y.E which should mean Your Excellency!  Minor but serious maladjustments like this were a common situation among the elite of Africa of those days. 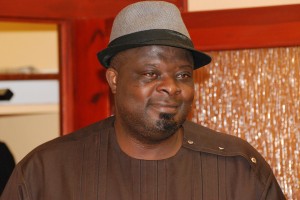 Furthermore, Brettenwoods institutions (IMF and World Bank) did not help African leaders a lot mainly, through some policies like; Import Substitution, Structural adjustment Programme and  the attendant  austerity measures it came with. These policies he argued killed any progress Africa must have made because among others subsidies which they preached against for Africa was possible in developed countries. According to him, it got so bad that he was informed by the World Bank as a military head of state that he was under-borrowing whatever that would mean!!He borrowed and ever since, it became a usual practice until the Federal Government of Nigeria was servicing debts with $3.5 Billion annually. Same procedure was common in the whole continent.

In all, African countries realized that certain policies were dead on arrival maybe as aftermath of conflicts, coups and counter coups, one party state which joined to contribute to the erosion of essential human development issues like education and health.

Furthermore, the paper argued that with the United Nations coming out for the first time in 1999/2000 to set out realistic/achievable goals in the form of MDGs, African nations followed suit with the replacement of OAU which was formed with an eye on political liberation for AU which is all about pursuit of economic development. This is further captured in the NEPAD charter which supports the adoption of reforms in public service delivery like in health, transport, housing, water, and in Agriculture, Financial and other critical infrastructure.

The result of these reforms is an average 5% growth rate in 2/3rd countries of Africa thereby giving Africa a new leaf of life. Obasanjo advised that Africa should not give up on continuing the path to development regardless of the enormous challenges facing the continent.

The African Diaspora in Hamburg: A...