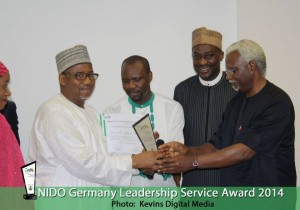 The Abuja Land Swap Initiative brought about by Federal Capital Territory (FCT) Minister, Senator Bala Abdulkadir Mohammed to tackle and fast track the infrastructural development of the Territory, which is already opening up ten new districts, has won him an international award. The Minister received the “Leadership Service Award 2014” from the Nigerians in Diaspora Organization (NIDO-Germany) for the unprecedented record of initiating Abuja Land Swap to confront the snail moving provision of infrastructure in the Federal Capital Territory at Leonardo Hotel, Hamburg, Germany on Saturday.

The Chairman of the Independent Corrupt Practices and other Related Offences Commission (ICPC), Mr. Ekpo Una Owo Nta presented the prestigious award to the Minister for being a promoter of Trade and Investment / Millennium Development Goals (MDG).

The Minister while appreciating the award, promised that the award will spur him to greater heights in the service to humanity and thus dedicated the award to President Goodluck Ebele Jonathan who has given him the opportunity and latitude to make such contributions to the country.

Meanwhile, the Minister made presentation on the activities of the FCT Administration to the mammoth crowd at the occasion and revealed that in order to reposition the Abuja Environmental Protection Board [AEPB] for more effective service delivery, his Administration is putting finishing touches to a plan of introducing ‘Pack and Pay’ of the Abuja waste disposal regime.

The Minister revealed that arrangements are almost completed to engage private investors in the Abuja Pack & Pay Scheme that would empower them to collect refuse and be paid by the residents of the 250 square kilometers of the Federal Capital City, Abuja.

According to him, the prospective refuse collectors would only be made to pay taxes to the FCT Administration thereby revolutionize the sub-sector for better results as such waste may soon be sold for generation of energy.

“With this revolution in the sub-sector, the residents will surely have a better deal as healthy competition would set in while government finances formerly tied to such job, could be channeled to other social services deserving additional attention,” he stressed.

The Minister urged NIDO members across the globe to take advantage of the enabling environment provided by the FCT Administration to return home and invest in the Federal Capital Territory.

His words: “Opportunities are abound in the Federal Capital Territory especially those for the knowledge based like the Abuja Technology Village and the Abuja Film Village International where NIDO members can conveniently participate with their knowledge, experience and expertise”.

He encouraged them to also assist the country by always being good ambassadors and scout for genuine investors for Nigeria; noting that this is the best time to invest in Nigeria as President Goodluck Jonathan has unbundled several sectors of the nation thereby, making Nigeria investment haven for genuine investors. 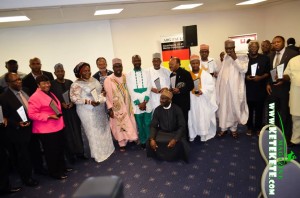 The Minister remarked that with the successful implementation of the on-going Abuja Land Swap initiative, over N3.2 trillion secondary investment is expected to be generated for the Federal Capital Territory.

Senator Mohammed also said that apart from N3.2 trillion, the sum of N450 billion is already accruing to the FCT Administration from the Land Swap primary investment, which is the cost of the infrastructure to be provided by the investors.

In a lecture to mark the event, the Chairman of ICPC, Ekpo Uno Owo Nta announced that Senator Bala Mohammed is a veritable partner in the fight against corruption; recalling that his Commission had conducted a study over Abuja land scam and handed it over to the FCT Administration“ and to my utmost admiration, the Minister has religiously used the study to drastically reduce land racketeering in Abuja”.

“There is massive reduction of fraudulent land practices as a result of the Hon. Minister pro-activeness based on the ICPC study and it gladdens my heart,” the Anti-Corruption Czar emphasized.

During his welcome address, the President of NIDO-Germany, Kenneth Gbandi said that the theme of the celebration “Mastering Nigerian Society Challenges and Optimizing Business and Investment Opportunities” was adopted to see how their members could assist Nigeria.

He restated that the celebration intends to network support from the Chambers of Commerce and   Industry in Hamburg and Berlin respectively for Nigeria.

The ceremony was also attended by the Nigeria Ambassador to Germany, Counsel General of Nigeria to New York, FCDA Executive Secretary, Coordinator, Abuja Infrastructure & Investment Centre, FCT Director of Economic Planning & Statistics as well as a Nigerian who is the Municipal Legislator; Ostend City Council, Belgium; Director-General, National Oil Spill Detection & Response Agency in Nigeria, to mention but a few

Rejoice With Me! Engr. Sebastian U...