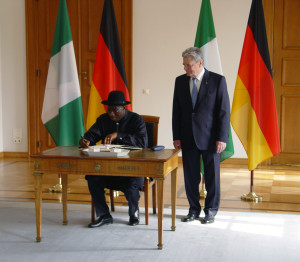 “I‘ll not contest 2015 election – Jonathan:” “President Goodluck Jonathan, yesterday, said he has no ambition to stay in office beyond 2015, assuring Nigerians in Diaspora that while he will not contest the 2015 election, he will ensure that this year’s election is free and fair.” ( Photo AH)

Again, you have heard that it was said to the people long ago, ‘Do not break your oath, but fulfill to the Lord the vows you have made.’ –Matthew 5:33 KJV

You shall be careful to do what has passed your lips, for you have voluntarily vowed to the Lord your God what you have promised with your mouth. –Deuteronomy 23:23 ESV

When you vow a vow to God, do not delay paying it, for he has no pleasure in fools. Pay what you vow. It is better that you should not vow than that you should vow and not pay. – Ecclesiastes 5:4-5 ESV

Quoting President Goodluck Ebele Jonathan, in Addis Ababa on January 31st, 2011 while meeting with Nigerians working in the UN and the AU, as reported by Daniel Idonor in an article in Vanguard of 1st February, 2011, captioned, “I‘ll not contest 2015 election – Jonathan:” “President Goodluck Jonathan, yesterday, said he has no ambition to stay in office beyond 2015, assuring Nigerians in Diaspora that while he will not contest the 2015 election, he will ensure that this year’s election is free and fair.” [www.vanguardngr.com/2011/02/i-ll-not-contest-2015-election-jonathan/ ]

This particular article was viral. Over 5000 people shared it on the Vanguard page alone. This translated to hundreds of thousands reading it online and many more in the print version. It was one more of many instances in the run up to the April 2011 election where the serving President of Nigeria assured the country’s people that if reelected; he will not contest in the elections in 2015, him being strongly of the opinion that “four years is more than enough to make all invaluable changes to a nation.”

By 2015, Jonathan would have been in Aso rock and the executive governance of Nigeria for 8 years total. 2 years 9 months as Vice President under a very ill and regularly absent President, 3 months as acting President, 1 year as President in a first short term, completing the term of late Yar’adua, and 4 more years as President and commander –in-chief for a second, full term.

Not a novice to the possibilities of the office, the President had already experienced considerable time as President and Vice (4 years) and made enough executive decisions to appreciate and understand the full context of his promise. He knew what could be done in 1+ year he had served as President and 2+ years as Vice; and consequently understood properly better than any of us, realistically how the 4 years he solicited and promised will be enough, and all more time he needed to give Nigeria fresh air.

Was this promise to complete his work for Nigeria by 2015 and not contest re-election, the word and bond of Mr. President? We have heard that he signed this same promise. We have seen several different copies and instances of the same promise at other times in all other major Nigerian editorials.

Verily if this was not what the President said and promised Nigeria as a covenant to woo and court our support to vote him in, in the April 2011 Presidential elections, he would have refuted these headlines spread in all Nigeria’s top dailies.

Reno Omokri, Reuben Abati, Doyin Okupe or whoever was Mr. President’s media and publicity person at the time, did not come forward to dissociate Mr. President from this covenant, as is the case in more trivial perceived misrepresentations. Clearly this is the word, bond and covenant of President Goodluck Ebele Jonathan with the people of Nigeria, made before God and man.

This was the covenant upon which the Nigerian masses agreed to select him and vote him into power.

These simple, fresh-breezy words, the promise to not deathly cling on to power but to rather ensure he establishes a free and fair playing ground come 2015 for whoever might contest, made many of us support his candidacy. This was not just another political promise. This was his memento insignia.

We have little excuse not to give him the benefit of trust. He swore to us that he will not be a liar:

What I do promise is this — if I am elected president in 2011, I will make a covenant with you, the Nigerian people, to always do right by you, to tell you the truth at all times… –Goodluck Jonathan on faceBook; CNN, September 15, 2010

It is 12 months to elections! Nigerians call upon our President to fulfill the other part of his covenant, – the creation of a true and decent election setup for the best State and Presidential candidates who emerge from PDP, APC, LP, PDM, NCP, SNP, APGA, AD and whatever other political platforms to contest come 2015. He will do well by also helping Nigeria establish a decree that bans all old politicians and their crooked friends, mentors and mentees from future elections, participation, sponsorship or otherwise. It is time for our Youth… a fresh start… a new leaf. Like clock-work, throughout our history, the Military take over when we violate our promises to the people and mess-up. Do we want this?

Mr. President has not come out to declare he will violate his word and break his covenant. I do trust our President will not do any such thing. I believe he is a man of honor, of truth and a man who fears God.

Sadly and why I write this is that, I believe it is legally permissible for him to say he is not running; what he cannot yet do is say he is running —due to INEC stipulations. I wonder why he hesitates to say what Nigeria is sure he will —that he won’t be running? Why toy with us on something as serious as a covenant before God and man with a pledge to be true and do right?

Now, indeed and in truth and from the beginning of time and surely till the end of time, people will break their covenants to man and God and renege on their vows.

May the anger and curse of God not be upon the great peoples and nations of Nigeria. Amen.

Opposition of the Signed Anti-Gay...