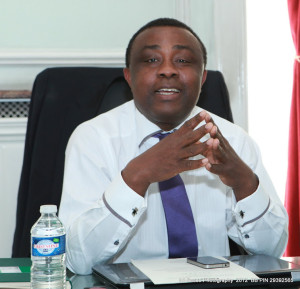 Q:  What role is NIDOE playing in defining Nigeria´s role in international diplomacy?

Nigerians in Diaspora Organisation can only play a facilitation role as far as international diplomacy for Nigeria is concerned. I guess that as an organisation, we have always sought to understand in the first instance what our foreign policy priorities are before making a determination on how and where we plug in. Policy as we know is dynamic, rather than static but one thing that has characterized our  foreign policy is a focus on Africa as a regional power and active player in international organisations like the United Nations. Beyond working closely with our Embassies around the world, we also take initiatives of our own. For example, we have been involved with the African Union quest to make the Diaspora a bona fide Region. Also, when Government went all out in mid-2000 to work on our battered international image from the ruins of military dictatorship, I recall the crucial role we played then, jointly with a US partner in the sphere of international understanding, setting up meetings and organizing events. I guess the climax for me personally was when, as Executive Secretary, I was in a Delegation to receive a highly valued international award for the Federal Government in Torino Italy. Another example is the lobby work around debt cancellation for Nigeria. We were an unseen element of some of the delicate meetings in a number of world capitals, facilitating things from behind the scene, falling back on the Diaspora unique knowledge of the host countries and their people. Today other African countries are studying our model of Diaspora engagement. Again this is an area where we provide leadership by guiding them based on our experience setting up the most exhaustive African Diaspora Movement, which is NIDO. Don’t ask me how effective our structure is but I know that our model is one that others are keen to replicate. 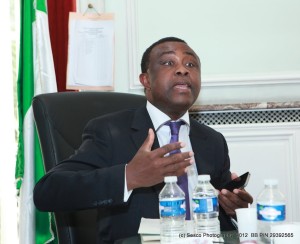 Q: Nigeria´s trade on the international market is predominantly in oil and gas, what is NIDOE doing to broaden the frontier of trade in other sectors?

Firstly in the period 2007 – 2009, we established the US$200 Million Diaspora Investment Fund because we felt that we had a role to play in Nigeria’s desire to deepen access to global capital. This was also part of a broader strategy of moving the emphasis a bit away from Oil & Gas. That Fund got encumbered by the financial melt-down and never really took off despite signing on a Fund Manager and setting up a Holding Company to drive it. It remains our hope that the Diaspora Investment Fund will be activated in the near future. In August we launched our series of Trade Missions to States of Nigeria starting with the State of Osun. We took with us from the Diaspora 13 investable projects ranging from renewable energy to agriculture, mining, education, housing, tourism. We seem to be pressing home with the project the idea that oil is good but so too is the non-oil sector. At Chapter level, we are taking on all sorts of projects, for example our Swiss Chapter is collaborating with the Swiss Government and setting up Technical Training Centres in Nigeria. I also know that the Belgium – Luxemburg Chapter, which by the way is my Chapter, is gradually developing a project around food security / agriculture and the Chapter Executive, working with Ambassador Felix Awanbor, had a fruitful session with the Minister of Agriculture during a recent visit to Belgium, just to give only two examples. 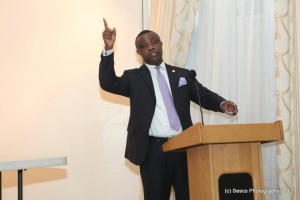 Q: In what way is NIDOE helping to implement or accentuate the policies of the present administration in Europe?

We are meant to be Nigeria’s permanent Ambassadors wherever we are.  It is not different in Europe. We do this on advisory basis working with the Embassies and High Commissions. Sometimes there are confusions as to which policy tool NIDO represents: foreign policy or trade and investment. I guess that depending on the period of time we usually fall into one side or the other. Like I alluded to earlier, I know that when it was Nigeria’s goal to have its debt written off, we leaned towards that and facilitated it from our Diaspora vantage point. The emphasis at present seems to be on trade & investment. Through organizing seminars, trade missions to and out of Nigeria and helping to build capacity in areas like tourism, service delivery and so on we contribute our quota in national development. It’s worth interjecting that we also work with the private sector and civil society organisations as partners.

Q: Nigeria´s image is getting bartered left and right due largely to terrorist act of a minute few, what is NIDOE doing about this?

Since becoming an adult, I am not sure I know a time when our image as a nation state was never battered. Yet we are still very much around. Therefore we are confident that this stage will come and go. Our position as an organisation is that we should not be the ones beating ourselves up. Ours is to defend the obvious, which is that terrorism seem to be everywhere now; in the UK, USA, yes Nigeria too. Rather than dissipate energy trying to justify why we should not be referred to as a terrorist country, we should spend time fighting it. And that seems to be what the Government has done recently when Mr President declared a State of Emergency in three States of the country. I’ve always maintained that nothing should be ruled out in addressing terrorism in Nigeria. We should negotiate but must not fail to move in with the tanks if that’s the language those who choose to maim and kill innocent citizens would hear most. What we are doing about it? Well, we have continued to nurse this idea of conducting a comparative study of the concept of community policing in all the 18 countries where we have a presence in Europe. At the end of the study, we’d be in a position to recommend a concept that will work best for Nigeria.

Q: What is NIDOE doing in the area of political education as 2015 general election draws closer?

It could be a good idea to find some domestic partners, non-state actors, with whom we could partner towards massive political sensitization actions in the run up to 2015. An informed voter goes on to be a good voter in terms of making an informed choice of who your political leader should be. I think we are also well placed to organize political debates with candidates. We are non-political, non-religious and non-tribal but should not exclude us from undertaking political empowerment.

Q: Nigerians in Diaspora is acknowledged to be remitting close to $5billion home annually, in what other areas is NIDOE visible?

Yes remittances from the Diaspora are huge. Indeed a lot more than official sources have documented. If you add monies sent home from the Diaspora via informal channels you’d begin to see that this is an important source of foreign currency for Government. Beyond remittances, the Diaspora is making its mark daily in the area of projects. There are a number of development projects in small communities here and there up and down the country. Some individual Diaspora have scholarship funds through which they finance the education of a few bright but cash-strapped fellows within their communities. We know that for the Diaspora, a few communities won’t have pipe-borne water. NIDOE for example did set up a couple of years ago, a solar energy for a rural community up North. There are also Medical Missions supported by NIDO all year round, saving lives, et cetera 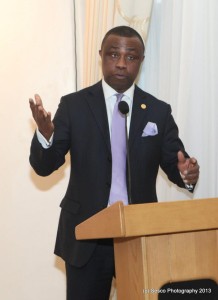 Q:How would you rate the performance of your colleagues serving in government?

The number of Diaspora who have been called home to serve at various level of Government is in the increase. That one has lived or studied abroad is not a guarantee of success in serving in Government. I believe that some of the Ministers who are doing great jobs in their different portfolios have not lived abroad. Don’t get me wrong we still have a long road to travel before we get to excellent performance by our Ministers but what I particularly find interesting is the fact that Mr President has introduced some Key Performance Index for all Ministers to justify their work. The last couple of years has seen a reasonable increase in the number of Diaspora being appointed to public and private sector positions at middle to top management levels. This is good news because I know that such cross-fertilization of talents and competencies add value to our economy

Q:How would you describe the general profile of Nigerians in Diaspora?

The Nigerian in Diaspora is generally hardworking with a deep-seated love of fatherland. Some Nigerians in Diaspora had hung up literarily on the country but are now gradually reconnecting voluntarily. Others are being forced to reconnect with fatherland, and that’s a funny one, by their kids born abroad and knows Nigeria only by name. A small but important number of them are taking interest in their Nigerian heritage and are pressurizing mum and dad to do something about it.

Q:Nigerians are subjected to various humiliations by foreign embassies, airlines and police, what is NIDOE doing to save our integrity?

NIDOE continues to take offence with the fact that the acts of a few bad guys are used to judge us all as Nigerians. Now, let’s get one thing clear, bad guys are everywhere and you’d continue to have them. So, we are not going to deny the fact that some of us are bad apples that we can do without but is that a reason for us to bury our faces in shame? Certainly not. There are enough good guys amongst us for those who are keen to know. I believe that we need a mix of education and persuasion in the first instance towards those countries and authorities that treat us with disdain. When needed, we must get very assertive because some of the practices towards Nigerians at Embassies and airports are abhorrent, often crossing the line into abuse of our human rights. I think also that integrity and credibility go hand-in-hand. There is no doubt that the introduction of Machine Readable Passports for Nigeria will boost international confidence in our travel documents. It also reduces the propensity for forgery and peddling of fake travel documents. I think that over time some of these anomalies will correct themselves because of these structural reforms. NIDO facilitates Nigerian community and cultural organisations in organizing information sessions and Town Hall Meetings to address the dangers of forgery and other ills. Of course we also stand up for Nigerians being victimized unduly anywhere quite apart from soft sensitization of law enforcement officers out here in the Diaspora