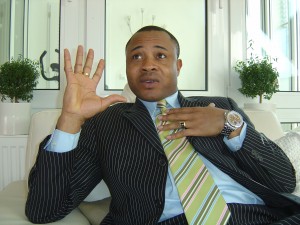 On several occasions, traffic cops have found themselves on the other side of the law, by faking the challan book.But Since the Jun. 2011 lunch of the Casstel ASVR system called E-Challan in the Hyderabad India that is just no more possible in the twin cities, as the Hubli-Dharwad police commissionerate has now gone hi-tech with Casstel technology.

For the first time in the country, e-challan machines have been introduced to do away with all kinds of manipulations and to bring in transparency in penalizing traffic violators. Several Unites of handheld e-challan or handheld machines developed by Chief  Cassidy Osujis Casstel technologies and Hubli-based Trinity Technologies and Software Solutions, is being used by the traffic cops in twin cities for the past few months.

Mr.Osuji said this advanced technology will save cops a lot of time, as it would take 3-5 minutes for cops to manually note all necessary details such as type of vehicle, registration number, name of owner, fine amount etc. The ASVR handheld device, which has printers and camera attached to it will generate the receipt instantly on punching the violation code.

Also, the total number of cases booked and amount of fine collected on a particular day will be known at the end of the day with just a click of a button. Earlier, it used to take at least half an hour for the cops to add figures from the manual receipts.

“Once a vehicle is flagged down for an offence, the registration plate details are entered into the device. Communication is established through GPRS with a central server that houses the records of all legally registered vehicles in the city, which then throws back a description of the vehicle. If there is a match, the offence is booked, an e-receipt is recorded and the details are stored in the server. In case the registration number does not match with the description, it could be a stolen vehicle and investigations could commence.”

Through this digital footprint, repeat offenders can be tracked and the police can analyze the type, nature and location of traffic offences easily, he said.

Evading fines would become tougher as the offence history would remain attached to the vehicle’s registration number even at the RTO office.

Since each traffic policeman is given a unique password to operate the hand-held device, there will be greater transparency in accounting for fines collected. “The system cuts out room for arbitrariness,” Mr.Raj added

The cops operating device are able to verify, confirm, transfer and store data into the remote central server directly without wires at the punch of a button through the help of the device inbuilt GPRS connection.

The user-friendly device will also help police improve their image, as there is no scope for public to doubt them regarding the amount of fine. They will not have to ask a series of questions or bargain with the police before paying up for the violation. Mr. Osujis personal assistant said the number of cases booked has also gone up by 30% since the introduction of e-challans in the State.

The new device also has the provision to issue court notices and has a ISD card reader to detect smart cards. The developers of the Hi-tech system, Chief Osuji and Rajneesh Ganjiyal of Trinity technology, said there is scope for further modification of the device.

If you drive regularly in Indian Hyderabad city, you must have seen traffic constables standing in junctions with a notepad and a pen. What they are actually doing is noting down the registration numbers of those vehicles that are found to be violating the traffic rules. You may be forgiven if you’ve been found guilty for once, but eventually you’ll be seeing the penalty letter landing in your post box. Remember that all the violations by a registered vehicle will be safely saved in a database.

What are those rules actually?

While there are numerous rules in the Motor vehicle Act, I’ll list the most common rules, not following which the rider has to pay the fine.

The system can be handled from many locations. And once you identify the violations on the road, it can be activated and there is Global Positioning Remote System (GPRS) connectivity to the main server which has got a detailed database on the vehicles as well as the offenders,”

It has to be remembered that the fine will be sent to the address of the vehicle owner only. So it doesn’t matter if it were you or some other person driving your vehicle on that day.

Fortunately, to determine who was driving the vehicle by narrowing down to the date and time of the offense, you have an online check up set up by the state Police that the any one can  enter his or vehicle registration number and his or her name and offenses, if any, fine were filed against your vehicle.

If any offenses against you, you should pay the fine which you will receive soon (If it wasn’t already sent) at any police centre or corresponding bank. If you are geeky enough, you can also make the payment online at their website.

A Traffic COP issuing an e-challan to a traffic rule violator (Without Helmet) using the Hand Held Device in Hubli.

“This technology driven initiative of the Chennai city police will go a long way towards better enforcement of traffic rules. The utility of these systems depends on the persons who handle them. The police, as law enforcement agents, should always strive to fulfill the aspirations of the people by serving them effectively.”

Be safe…….Follow Traffic rules……Don’t jump the signal even if others do. Said Cassidy Osuji

NPDC and the Coming Revolution