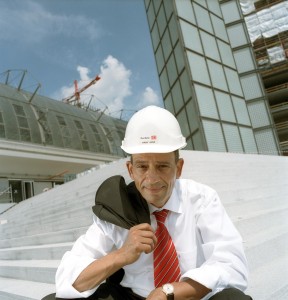 Engr. Hany Azer, an African of implacable engineering talent is the Architect of one of the world most modern and most expensive train station, costing about 700 million Euro. The construction which swallowed up 500 000 cm3 concrete and 85 000 tone of metal was finally opened to traffic on the 26th of May 2006. The train station is the New Berlin central station. It has 54 moving steps, 43 lifts, over 15 000 m2 shopping centre and 42,000 m2 office block spread over three floors and the station is currently offering 900 jobs to Berlin multicultural population. The roof of the new station is made of clear transparent glass giving a fantastic view of Berlin, including the famous Reichtag (seat of the Government)

On a daily basis the station will witness 164 long distance trains, 324 regional train and 616 local trains. Up to 300 000 passengers are expected to use the train station on a daily basis.

On the commissioning day, top German politicians and business community were invited to Berlin to witness the official opening by the new German Chancellor Angela Markel. Under water tight security Engr. Hany Azer officially handed over the Germany main central station to the operators and the government. 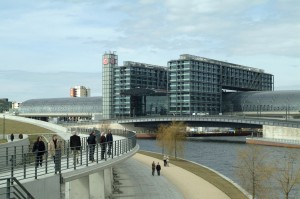 On the eve of the official opening ceremony of the train station, Engr. Hany Azer spoke with African Heritage Magazine in his operational office.

Extract of the interview:-

AH: What is your reaction to the “Kultural Ambassador Merit Award” (KAMA) as African Heritage Man of the Year 2006?

I feel very proud and horned for such recognitions. I don’t know if I really merited it. I am happy to come from North Africa and to make my contribution to the society here in Germany which has brought me this award. This is no doubt a prove that every African has the potential and the opportunity to prove his or her talent. It is equally a prove that Africans have the integrity and the ability to execute even the most complex engineering or architectural piece.

AH: The official opening of Berlin central station will take place next day with the German Chancellor, are you excited?

Yes, a little bit, considering what has been speculated and written in the media. No one believed we could finish the project just in time for the world cup. Moreover when the German Chancellor is expected to open such an important project there are always a little bit of anxiety on a successful commissioning.

AH: What was the most challenging aspect in this gigantic project?

The biggest challenge was the foundation itself because of the nature of the topography and the underground complexity. The glass roof over the entire station which is one of such construction in the whole world was another engineering feat.

The construction of complex tunnel connections in a very sensitive underground with a lot of pipes carrying water and different liquids was a major engineering challenge. More so the nature of the area where the tunnels are expected to go through needed a very careful and experienced engineering skill.

AH: How do you feel now?

I don’t really know, it is very difficult to explain. I am still to come with teams that the project is completed. I also feel a little bit sadden that I am giving up a project which is like a baby to me. I saw it grew from day to day and now I will no longer have anything to do with it. But I am happy that the project is one of its kinds in the world.

This articles was first published in 2006 just before the World Cup in Germany and republished as part of our flash back articles.

The Golden generation of Africans...