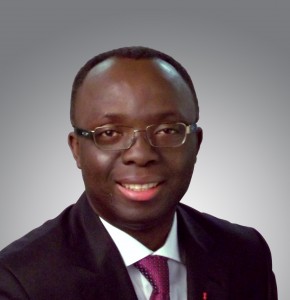 To stand for a while is accepted but  to be seated forever is a sin; whilst is nice supporting a team is however best playing yourself. As migrants or minorities’ in Germany the best way to speed up integration, reduce unemployment, fight discrimination and better education is to be part of the decision making machineries.

It is therefore necessary to encourage people who have the competence and the desire to go into politics, being CDU, GREEN, SPD, LINKE or FDP. The change we need and can believe in can only take place from within. Trust me; the possibility to change a system from outside is less.
Today, we shall be introducing to you one determined African migrant who vied for political position at (communal and regional levels).  Mr. Elombo Bolayela who was born on 28.12.1965 as the son of evangelical pastors in Kinshasa (Democratic Republic of Congo).

He is married to Mrs. Angela Bolayela – Marquart since 1998 and blessed with five children.

Mr. Bolayela arrived in Germany in 1992, as an asylum seeker. During his stay in Syke, he completed his vocational education as a carpenter and has since 1999 worked as a salesperson in a hardware store in Bremen. He has been a member of the Bremen trade union for the past 9 years. His various contributions and tireless working has been recognised by electing him as the Vice Chairman of the Union since 2009. A position he has held till today.

Mr. Bolayela has never been self-centred personality since his arrival in the federal republic of Germany. He has all these years worked not only for his personal interest but for his colleagues and migrant minorities who faces various challenges in his community. He is a member of the SPD in the local association at Oslebshausen a suburb of Bremen in Germany.

He is today a member of parliament Bremen (SPD)