Echoes of the 100 Most Influential Africans in Germany : Adeyemi Olorunfemi ADEMUYIWA

Echoes of the 100 Most Influential Africans in Germany : Adeyemi Olorunfemi ADEMUYIWA 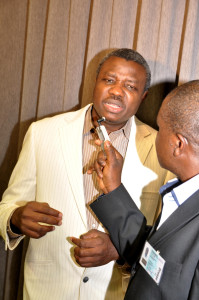 Echoes of the 100 Most Influential Africans in Germany

Born in 1968 in Iwo, Nigeria. In 1984 he gained admission to Obafemi Awolowo University and graduate in 1989 with a Bachelors in Electrical Electronic Engineering. In 1992 he moved to Germany for further studies and started a second study in Business Administration, at the University of Augsburg. Upon the completion of his study in Augsburg he starts a consultancy career in IT with a global leading American corporation that specializes in building extra large Data Ware Houses.

His interest in politics started at a young age at school, where he lends his voice to the weak. The art of civil courage earned him the nickname freedom fighter at that time.  Now in Germany,  he engage myself in grass roots politics by joining the ‘Social Democratic Party of Germany (SPD) back in 2005 in Augsburg.  After moving to Hamburg in 2007, he intensified his political activity and was a member of the working group ‘Sozial und Stadtsentwicklungs’ for Hamburg Nord.

Since 2011 Ademuyiwa is member of the Board of the District SPD in Fühlsbüttel, Ohldorf und Klein Borstel. Presently he work as a product manager for Lunar GmbH, the IT arm of Edeka. He is also the financial secretary Nigerians In Disapora organization (NIDO). He like sport, nordic walking, jogging and  kickboxing