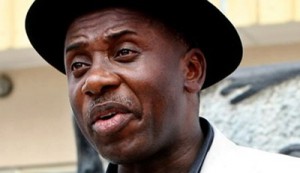 Chairman of Nigerian Governors’ Forum (NGF) and Rivers State Governor Chibuike Amaechi, Thursday warned the National Assembly of the dangers inherent in its current attempt to amend some sections of the 1999 Constitution.

He said if the National Assembly fails to carry the people along in the amendment process, the exercise might fail as the state Houses of Assembly would frustrate it.

“If you want it to have the people’s support, it must be slowed down. You must consult the people. It is when this is done that it can be called the people’s constitution,” Amaechi stated.

The governor, who said he was aware that the on-going constitution amendment by the federal legislature is now in the second reading, added that a constitution review should be total and comprehensive. He said that for the institution to solely embark on such act without recourse to the people would be a misnomer.

He therefore warned the National Assembly against continuing with such amendment without carrying the people along, threatening that the exercise would be frustrated by state Houses of Assembly.

Also, former Senate President, Ken Nnamani Thursday warned his successor and incumbent President of the upper legislative chamber, Senator David Mark, against turning the 1999 Constitution into what he described as a “Village’s Minutes’ Book” through frequent and routine amendment processes.

But Mark in a swift reaction, assured Nigerians that the National Assembly would ensure that it follows laid down procedures by returning to the people who elected them before amending the constitution.

According to Nnamani, while the National Assembly reserves the right to amend the constitution, it does not possess the exclusive power to re-write the constitution. He said such power is only vested in a Constituent Assembly.

Therefore, Nnamani advised the National Assembly to constitute a constituent assembly if it wants to re-write the constitution.

Also lending his voice to the discussion, National Chairman of the Action Congress of Nigeria (ACN), Chief Bisi Akande, advised Mark to ensure that what emanates from the National Assembly should be nothing but the people’s constitution.

“President of the Senate, please ensure that the constitution produced under your leadership is constitution of the people of Nigeria,” Akande pleaded.

But in his reaction to the comments, Mark who disclosed that he had read some newspaper reports where certain Nigerians had insinuated that members of the National Assembly lacked the power to tinker with the constitution, added that what is most disturbing in Nigeria is that once people are elected into office, they are believed to be a bunch of dullards who lack common knowledge of what should be done.

He recalled that the last time the federal legislature amended the constitution, it did not do so unilaterally, adding that it ensured that public hearing was conducted in each of the six geo-political zones of the country.