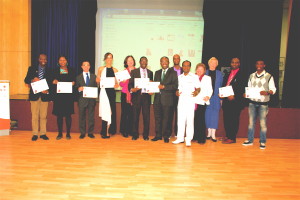 ACF, an advisory forum for the African community in Hamburg, was launched to articulate the needs of the African community in Hamburg and to formulate, promote self-help projects and initiatives, as well as act as the multicultural platform for peaceful coexistence among all migrant groups in the Hanseatic city of Hamburg.  On Saturday the 25th May 2013, the institution is celebrating its one year anniversary and the African Day 2013 in Hamburg to report to the community of their achievements in the last one year. 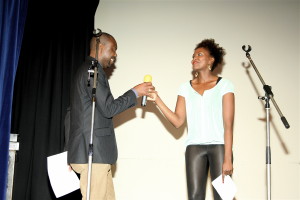 Further activities lined up for the anniversary include lectures and symposia, a live TV debate, a community roundtable talk, art & cultural exhibitions, an interfaith worship and the ACF community service award. ACF want to use the Award to thank those who supported the immigrant community  in Hamburg in the past years, especially immigrants of African descent. The individuals and organizations selected for the award and the justification of the judges include: 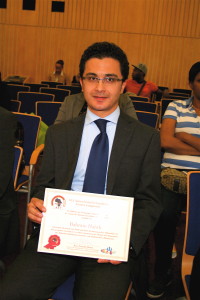 Over the years he has been in the forefront of promoting Ausbildung for immigrants, including the African immigrants in Hamburg through the Arbeitsgemeinschaft selbstständiger Migranten e.V. (ASM).  He has not only helped many African get Ausbildungsplatz but also helped them get placement in companies for their internship. He has equally help a number of African firms obtain the dual Ausbildung certificates which will enable them to offer practical jobs and tanning for fellow Africans. For his tireless push for the development of the immigrant community in Hamburg economically and educationally he was selected as a recipient. 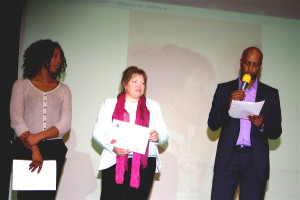 Frau Fransiska Amaregbu: Involved in social and economic wellbeing of the community and the dissemination of information. She is also involved in the mobilization of the African NGOs to take part in seminars and symposiums for the up liftment of the community, starting with her own Association, “The Okigiew Pregressive Union”. She was also involved in the founding face of ACF through her free secretarial service and writing of protocols to various ministries and took an active part during its first inauguration ceremony. Just recently, she also played an active part in the organization and mobilization for the African Women Award in Hamburg. For her engagement in the community and mobilizing the unions towards professionalism, she was selected as a recipient. (Pix:RmiddleFrau Fransiska Amaregbu) 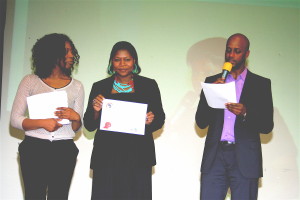 Balimaya Ton Hamburg e.V. (Mali): Is one of the most effective and most organized ethnic/cultural organizations in Hamburg. Apart from having a well documented program of over the years, they have been equally active in providing services to African women, especially mothers. They also have been consistent in organizing African women’s conference involving; Cameron, Senegal, Gambia, Nigeria etc.. in an annual conference where the problems of African women and their children are discussed. For their active multi-cultural social and cultural engagements, ACF selected the union as a recipient. 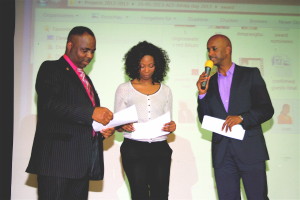 There are many Africans living in Hamburg. ACF believe that the spiritual development of the community is part of the general development of the community. Over the years, the African Christian council is working to use the power of love and the truth of the Bible in this direction. The indispensability of the churches is obvious in the fact that we have close to 100 Churches in Hamburg attending to the spiritual needs of the community and the general public.  ACC with Pastor Prince Ossai Okeke, chairman and Apostle Boateng Bona Siriboe (African Christian Council Hamburg e.V) in partnership with Pastor Peter Sorie Mansaray, interkulturelles Leben have been able to establish the African Center and for the first time in history they are working on the realization of African Community event Hall. ACF is thanking you with this recognition for being our spiritual guidance and encouraging you to do more in uplifting the spiritual and socio-economic needs of the community also. 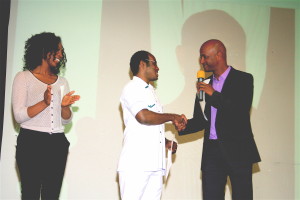 Nigerian Community Germany Football Club, a nonprofit organization. It is a multi-ethnic and multi-cultural football club, featuring players from Nigerians, Ghana, Togo, Germans and other nationalities in Hamburg. NCG FC Hamburg is a member of Hamburg Sport Bund (HSB), Hamburger Football Verband (HFV) both affiliate to German Football Federation (DFB) NCG FC is one of the first Immigrant organization to achieve this feat. NCG FC supporters club include past African international and professional footballers and international prominent personalities including Olaf Scholz, the Governor of Hamburg. For promoting inter African relationship and using sport as a tool of integration we are saying thank you NCG FC. 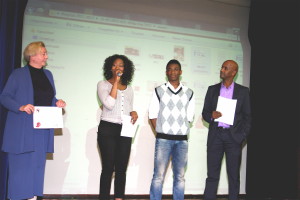 Ayedele Medaiyese woke up one morning to realize that he will soon be on his way to Africa because the state of Hamburg wants to deport the 18 year old Ayo Nigeria. His classmates from the Nelson-Mandela-comprehensive school took the fight against his deportation to Facebook, making the case known to the public and mobilized thousands of supporters puting the authorities under pressure. African Consultative Forum – ACF on learning this,  joined in the fight against his deportating and appeal to the state to reconsider their position in a letter dated23.12.2012 titled “AFRICAN CONSULTATIVE FORUM (ACF) PRESSEMITTEILUNG IM FALL AYODELE. This Initiative “Ayo bleibt MIT uns” by his classmates from the Nelson Mandela comprehensive school and the whole school  mobilized over 19.000 that evently saw the state making the right compromise. For the exemplary spirit of oneness and real integration. ACF is proud to select “Ayo bleibt MIT UNs” and the Nelson Mandela comprehensive school with ACF community service award 2013. 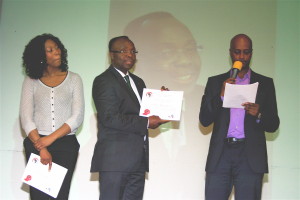 Mr. Bolayela has never been self-centred personality since his arrival in the federal republic of Germany. He has all these years worked for his colleagues and migrant minorities who face various challenges in his community to help articulate a collective front and effort. To help drive the change, to this end he joined a political party in Bremen and against all odds won an astonishing victory at the parliamentary poll to become the first first black African candidate for a German political party North of Germany to attain that feat. Within his very short period at the parliament he initiated a bill and got it passed “Bremen needs all the heads – Perspectives for Foreign graduates in German Universities”.   Parts of this law involves the extension of period for foreign graduates seeking for a job, ease unnecessary restrictions to earn a decent living, reducing the current minimum income requirement of 66,000 Euros to 33,000 Euros annually, improve co-operation between the employment Agency, the Chamber of Commerce and the Universities in Bremen to fully implement the scout and utilization of such potentials. He since has been active as a motivational speakers in many African Churches and event both in Bremen and Hamburg and other parts of Germany. For his strong contributions to the immigrant’s community and the Africans in particular, ACF wish to say thank thanked him as “Flame Keepers” with the ACF community service award 2013 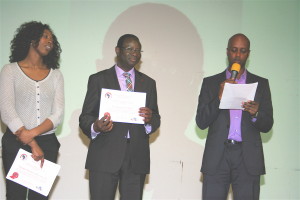 Dr. Karamba Diaby: Germany is about to make a historic leap into the future. You do not need to be an apostle of any political party or be interested in politics to appreciate the enormity  of what is about to happen. For the first time in history of Germany an African immigrant is about to be elected into the Germany Bundestag come September 2013. This feat though happening in far away Halle Salle does not come easy; it is based on hard work, clear vision and consistency that will have a powerful positive political, economic and socio-cultural effect for the rest of us. He has since been active as a motivational speaker, a motivator and epitome of integration and collective visible progress. For his strong contributions to the immigrant’s community and the Africans in particular, ACF wishes to thank him with community service award as “Flame Keepers”. 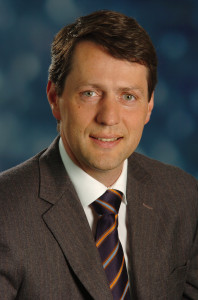 Senator Dietrich Wersich a.D. was appointed in May 2006 the Stadtrat of the newly formed Behörde für Soziales, Familie, Gesundheit und Verbraucherschutz. In April 2008 he was made the Senator für Gesundheit und Soziales under the schwarz-grünen governement the controlling ministry for Integration. He was not only positively disposed to the concerns of immigrants in Hamburg including the Africans he went further to initiate the first integrationsbeirat as it know today. He identified with the community by attending their various events and churches to inform the community of the various possibilities open to them in the city of Hamburg thereby laying the foundation for active participation of the community. He was equally personally present at the median inauguration of ACF on the 25th May 2012. For his positive disposition and support for the community ACF wish to say thanks to Senator Dietrich Wersich a.D. with the  community service award 2013. Senator Dietrich Wersich was represented by Frau Bettina Machaczek,  Mitglied im CDU-Landesvorstand und Beauftragte für Integration sowie in der letzten Legislaturperiode integrationspolitische Sprecherin der CDU-Bürgerschaftsfraktion

Kweku Douglas “The Eye of the community”

The image of the changing community has always been captured by him, in churches, African events, seen on social media, web pages and print and online Magazine, without any mentioning of this name. He has extended these services to most African Organizations including the ACF to cover and project all images on seminars, workshops and other events. From the pre-inaugural era of ACF to date, he had offered his services at no cost. For his positive disposition and support for the work of ACF and the community, ACF wishes to say thanks to Kweku Douglas as “The Eye of the community” with this recognition. 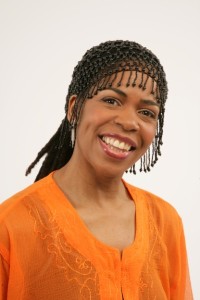 Love Newkirk is known for her talents as singer-songwriter, TV and stage moderator. She is the co-producer and moderator of an Afro-European TV segment “African out Look” where the African community tells their stories. The TV program won recently the Fink TV Prize organized by Hamburg Media School in co-operation with Hamburg 1. She had also moderated in the past many pro-African events like African Queen German, Black History Month and Afro-Gospel without financial gain in the support of the community. For her positive disposition and support for the community. ACF wishes to say thanks to Love Newkirk with this recognition. Johanna von Sachsen Coburg (Moderator Africa Outlook stood in for Love Newkirk.(Pix, R: Love Newkirk)

Tàimakoo e.V Club stands for different cultures and exchange of values that connects them. Among other things, they offer German courses, as well as an international woman café and open children’s studio for after school interactions. Tàimakoo came highly recommended by rganizations from notable Daycare centre, in the Phoenix area of Harburg and the District Office (Bezikamts) Harburg. For their engagement for Women and children, ACF wishes to say thanks with the community” with this recognition.

Germany is about to make a histori...