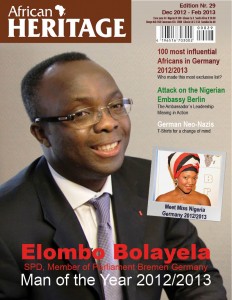 Who made this year´s most exclusive list and why?

But there are also plenty of reasons to celebrate and one of them is the celebration of the achievements of outstanding Africans in Germany in our annual 100 most influential Africans in Germany. While it was relatively tedious to choose the 100 most influential Africans from the pool of nominations, the choice of the person of the year was not. Though all the nominees were all very qualified, leaders in their own fields, however one person, Elombo Bolayela clearly stood out.

Mr Bolayela came to Germany in 1992, as an asylum seeker and did not settle at collecting only food cheques and bemoaning his situation but during this time he took time and completed his vocational education as a carpenter.  In 1999 he gained employment as a salesperson in a hardware store in Bremen and became a German citizen in 2004. He joined Bremen trade union and worked tireless for the interest of the workers in Bremen. In 2009 he was elected the Vice Chairman of the Union.

In May 2011 he proved all pundits wrong and won an astonishing victory at the parliamentary poll to become a Member of Parliament in Bremen City State under the Sozialdemokratische Partei Deutschlands (SPD) banner, the first black African candidate for a German political party North of Germany to attain this feat.

As we set to enter the year 2013 we joined our numerous readers to count our blessings and to wish them all a “happy & prosperous 2013. We thank you all  for being part of our success story  in 2012 and can only do better in 2013.

Our regular columns will as usual not be disappointing. We have educating and exciting updates on Business, society events to keep you in tune with the happenings in Europe and the Diaspora.

Merry Charismas and a prosperous 2013.

OPEN LETTER TO THE MINISTER OF INT...